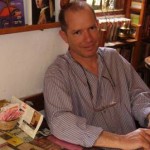 David Ehrlich is a writer and activist in the LGBT community, who in 1986 was one of the founders of the Israeli AIDS Task Force. In addition to the two books he wrote, his stories were published in magazines and anthologies and have been translated into English and published abroad.

David Ehrlich is also a co-founder of the literary cafe “Tmol Shilshom” in the Nahalat Shiva neighborhood in Jerusalem, a meeting place for writers and lovers of literature, a cafe also embraced by the gay community.

After his military service, Ehrlich started a career in journalism. He worked as a reporter for the newspaper Davar in Jerusalem and as a member of the editorial board of “oxygen”, a magazine for youth. From there he continued on to radio and was a reporter and producer at Kol Israel Radio. He then became a reporter at Ha’aretz for three years.

At the end of his work at Ha’aretz Ehrlich moved to the United States and became a lecturer at universities and schools.
In 1993, four years after moving to the United States, Ehrlich returned to Israel. During his time in the United States he became aware of a trend – coffee shops that are also bookstores. Upon his return to Israel, he decided to open a cafe in a similar format, although he had no knowledge of the business.

Cafe “Tmol Shilshom” became identified with the LGBT community, but also gets frequent visits from residents of East Jerusalem, visitors from other parts of the country, religious people and others. Ehrlich said in an interview: “For me, Tmol Shilshom reflects what I think about life: that we should be open to each other whether we are Arabs, Jews, black, white, yellow or polka dotted.”

In interviews Ehrlich said that came out as gay only at the age of 22. He then served as an officer in the army and was afraid to tell his conservative parents about his sexual orientation. However, after a few months he told them, and it wasn’t accepted easily. Ehrlich expressed his frustration from his coming out process and said that his relationship with his parents remained bad for many years after. He currently lives with his partner in Jerusalem.