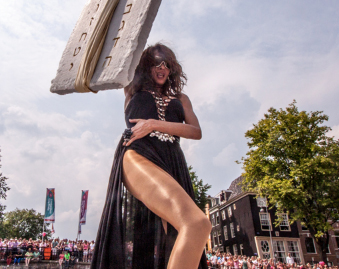 Dana International made quite a splash this weekend at the Gay Pride in Amsterdam, when the Israeli transgender singing sensation lifted a cardboard sign in the shape the Ten Commandments.

The controversial statement caused anti-Israel protestors to shout. But Dana, not one for shyness, answered the critics from her perch on the Pride’s first Jewish boat. Grabbing the microphone, she answered that the Jewish people are people who believe in love, in peace and in respect for all human beings.

The outspoken Israeli singer rarely hesitates to speak her mind.

Case in point: While a guest of honor at Israel’s embassy in The Hague, a video of her conversation with the Israeli Ambassador Haim Divon leaked online. The footage shows Dana looking back to all the anti-semitic and anti-Israel comments that she’s heard during her concerts around Europe. “You have murdered millions throughout history. If we look back a hundred years ago” Dana said, referring to European countries, “you conquered half of the world, you raped Africa. Now bring back all of Africa’s money.”

“And then we have to go to Belgium, to Mr. Leopold,” the Diva continued, “If any Belgian has anything to say about Israel, we’ll have to ask about the great Leopold, and where all the Belgian wealth came from.”