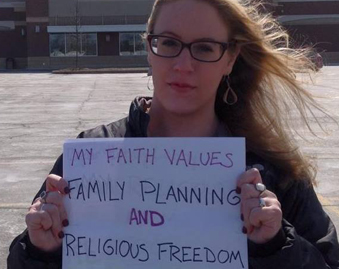 Joanna Blotner, campaign manager of the paid family and medical leave bill that the D.C. Council recently passed, talks about the path to the passing of the bill, and how it’s designed to be inclusive of LGBTQ families. 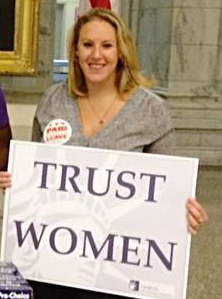 The D.C. Council recently passed a historic paid family and medical leave bill, on which our friends at Jews United For Justice (JUFJ) have been leading the charge for two years. The bill will cover all workers in D.C.’s private sector, enabling them to take paid leave in order to take care of serious medical issues for themselves or family members.

“I had gotten involved in LGBT activism primarily because of my friends and my family who are LGBT,” Joanna says. “One of my best friends from middle school came out to me the summer between our junior and senior year of college. He went to a Catholic school at the time, and I remember asking him what he was going to do when he went back to school, if he felt safe being out there. There was this very profound moment where he said, ‘I don’t know that I believe in God, but I believe that God gives us our friends for a reason.’ That comment helped inspire me be an advocate for my friends; it really struck me how different my Jewish upbringing was from his experience in regard to LGBT acceptance in a religious setting.

“The president of my temple when I was in high school was an openly gay man, and I owe him a lot because he was someone who advocated for me to get a mentorship program scholarship from the Reform Jewish movement. The idea that people had to reconcile their faith and their identity was just kind of shocking and horrific to me. Coming back to college that year, I wanted LGBT students on my campus to feel like they had a space in the Jewish community for them to be both Jewish and queer. I helped to start an LGBT Jewish group during my senior year of college, which was actually called Keshet. I also was lucky enough to have one of my first jobs in D.C. be at the Human Rights Campaign in the Religion and Faith Program and that really shaped a lot of my activism and professional experience in D.C.