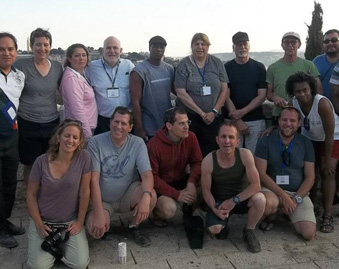 Here is a full translation of the article about A Wider Bridge’s recent LGBT group trip to Israel, that was published on Sunday in the Israeli popular website Mako. Click here for the original story in Hebrew

A very wide bridge: Arthur Slepian, founder and Executive Director of A Wider Bridge, an organization which connects the LGBT community of Israel to the same in North America, for the second year now has recruited about 20 Jewish American LGBT community members for a white-blue-pink trip to Israel. In an exclusive interview he identifies the similarities and the differences between the two communities and the importance of strengthening the connection. “It’s amazing how many people are working to make Israel a better place for LGBT people,” he says. 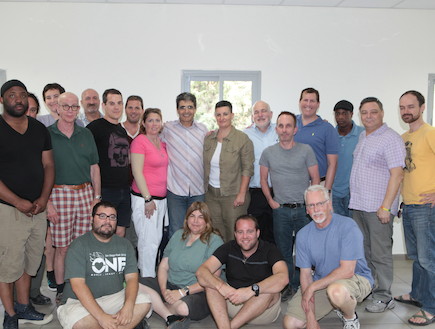 The goal of A Wider Bridge is to bring together the LGBT communities in Israel and North America, to create fraternity and mutual involvement between the two groups that a share common denominator and similar interests. That’s what the LGBT project A Wider Bridge is all about, and judging by the last group the organization brought to visit Israel, it is certainly succeeding in its mission.

I met the group in Gan Meir (in the heart of Tel Aviv), after they had explored Jerusalem and the north of Israel, and had met with various Israeli and Arab LGBT groups. Those 20 Jewish men and women, LGBT of all ages, came from  different places in the US for a ten day trip to Israel. They listened with interest to Avi Soffer, a stand out activist in the Israeli LGBT community, CEO of Hoshen  Irit Zviely-Efrat, and the previous chair of The Agudah, Mike Hamel, describing the lives of the community and the changes it has gone through throughout the years. Some of the trip participants suggested ways of helping the community in Israel, and pointed out the differences and the similarity points. They all shared a high degree of passion and involvement –  a desire to help make a change.

This blue-pink “roots journey,” now happening for the second year, is managed by Arthur Slepian. He started the organization in 2010 after research showed that the Jewish LGBT community feel less connected to Israel. “I realized that a smaller percentage of LGBT Jews has visited Israel, compared to straight Jews,” says Arthur, whose organization also helps in bringing LGBT artists and leaders from Israel to the USA, and runs a major website providing news, culture, opinion and stories about the lives of LGBT and Jewish people in both the U.S. and Israel.

For years Slepian has been one of the prominent leaders of the Jewish LGBT community in North America. He served as the president of the LGBT synagogue in San Francisco and as a leader of the Jewish LGBT alliance. According to him, he felt that the community needed a stronger and closer connection with the Israeli community. “If we work together, our communities can be stronger,” he says.

Slepian realized that a virtual connection was not enough, and in order to really bond the two groups he needed to start bringing members to visit Israel. “I figured that  Jewish American LGBT people would be interested in an all-LGBT group trip that would connect them  with gay life in  Israel,” he says.

Surprisingly, and despite the fact that Tel Aviv won Best Gay City in the world last year, getting people to come on board wasn’t an easy mission. The LGBT trip to Israel was publicized by other organizations and other Jewish and LGBT groups, synagogues and community centers. “We used Facebook and our website to spread information about the trip,” says Slepian. A large part of the publicity for the trip was taken on by a few other LGBT organizations who co-sponsored the trip and encouraged their members to take part in the unique project.

But beyond activism and politics, the group members also met with Yair Hochner, director of the TLV gay film festival, and also had some fun while learning about gay life in Israel. “It was important to us to present the diversity of the Israeli LGBT community, and I think we succeeded,” says Slepian.

“Coping with the Same Issues”

So what do Slepian and the group members think about the LGBT community in Israel? It seems that we have a lot to be proud of. Even though there has been major progress over the past few years in America, since American soldiers no longer need to hide their sexual orientation and more and more states allow same-sex marriage, the group members were really impressed by the political side of gay life in Israel. “It’s impressive how visible and open gay life is in Tel Aviv, and how much progress this young country has made on LGBT issues,” says Slepian. “It’s amazing how many people are bravely working towards making Israel a better place for the LGBT community.”

Slepian feels that there’s more similarity than difference between the two LGBT communities. “We are dealing with the same issues: coming out, marriage equality, same-sex parenthood, and the fight against homophobia. Israel has made  major progress with  certain issues such as being openly gay when serving in the army. In the US we often face strong opposition from fundamentalist religious groups that are very opposed to LGBT rights.

Despite describing Israeli society as “more masculine” than American society, Slepian discloses enthusiasm for gay life in Israel. “Maybe it’s because a lot of Israelis are secular and support this matter, even though similar kinds of fundamentalist groups can raise obstacles in parts of the country outside the borders of Tel Aviv.”

The LGBT trip that started last year is about to become a yearly event. “We don’t have the exact date for next year, but certainly we are planning to bring people here at least once a year.”