Seven years after the murder in Bar Noar that left him paralyzed in a wheelchair for life, Yonatan Books, 21, from Haifa, recalls that fateful evening, and tells about coping with his new life, making music, and the difficulty of finding love. 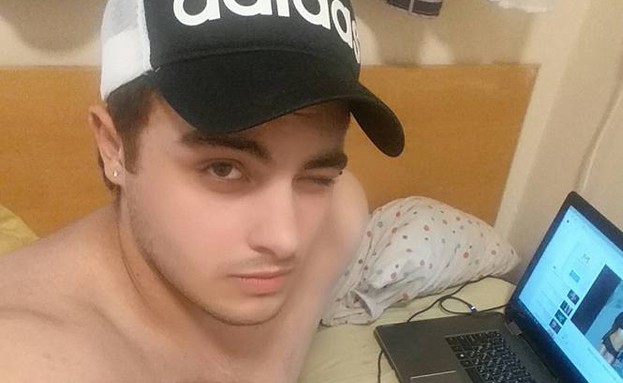 In the bathroom of Bar Noar I see a shadow in the doorway. I ignore it; there is no reason to be alert about it, probably someone went out or went up the stairs. I went inside the bar, Liz facing the front door, and suddenly something doesn’t feel good to me. I turn around with my back to the door and ask Liz, “Shall we get going?.” Apparently, the impulsive decision to turn around saved my life. In that second I hear loud booms and I’m sure it’s a dream. I freeze in place and suddenly feel a stab in the shoulder. I can’t imagine these are shots. The killer goes out for a moment, perhaps to ask himself ‘What am I doing?’, perhaps to replace the cartridge. When he comes back in, I remain frozen in place. I don’t know what to do. The noise of shooting continues and that fateful bullet is shot at me. The bullet that changed my whole life.

On the one hand I’m so mad at myself – why didn’t I grasp the initiative? Why didn’t I grab Liz and run out the door of the terrace? But on the other hand, it is impossible to judge a person in such a situation. I crashed on the spot and started to crawl. I felt my legs and even could move them. I remember that I crawled under the nearest table, lay down on my back, and my phone rang. It was my mom. The killer had just returned and I was scared to death that the ringing would finally finish my life. The ringing stopped and the killer fled. I was fully conscious when I got to the hospital. I remember they even gave me two CAT scans because the first one failed. How did I not faint? How did I not lose consciousness with the amount of blood that I lost? Only when they gave me the infusion did I fall asleep. Then I saw death.

The doctors predicted I wouldn’t make it. That’s what the nurse at the hospital told my mother two weeks after the shooting, when I was supposed to be released from intensive care. On the other hand, even the first hospital document said ‘moves his toes.’ I got shot in the lung and in my spine. In the hospital every surgery is documented on video, but my spinal surgery was somehow “shelved”; it miraculously disappeared and was gone. I’m sure there was negligence there, I was probably in a situation of life or death, and it was more important to keep me alive than not to tear some spinal nerves. I was unconscious for a week, and then another 7 months of outpatient rehabilitation for children in Tel Hashomer.

The LGBT community turned its back on me because I sued the Bar Noar “How dare you spit in the well you drank from?” people asked, even the miserable people who themselves were injured in the shooting and today, 7 years later, suddenly decided to sue the Bar Noar as well. What happened? Do you now dare to spit in the well you drank from? Can you imagine the life of a 14-year-old boy who went through this traumatic event, then has to deal with comments like “too bad you didn’t lose your hands too” or “it’s a shame that you survived at all.” My hatred towards the community as a result has increased and bitterness for having to deal alone with it all grew bigger with it.

The first two years after the event were full of self-pity. It could either give up on life or learn to live with what I’ve got and choose to see the good things. I decided to pull myself together. I completed my 12 years of school, I got a driving license and even bought an apartment. I am currently studying interior design and graphic design. It seems that I’m supposedly stable for life. Not every 21 year-old man has his own apartment and a car, but if you think that makes me a happy person, you are wrong. I would give up everything just to get my legs back…that young boy who loved to dance to Britney like crazy, with the dream of becoming a model. That dream had to be put away.

In the meantime, I’m having trouble finding a relationship. No matter if it’s male or female, unfortunately. Men turn away from me because most of them care only about “muscles and hung”, and don’t really care about the character. I’m not ugly, I love myself as I am and I wouldn’t change a thing about the way I look (maybe 10 kilograms less…), but I had a disastrous date that failed because I didn’t want to go straight to bed or let the boy stay for “sleep” after the first date. I may look innocent but I’m far from being stupid.

Even when I get to meet a girl, she judges me on my appearance, on my origin or on what I went through in life – instead of looking inside me. She looks at me as an object. Sometimes I have the feeling that maybe I’m not as good as everyone else. Probably in order to have a happy relationship, I need to -first and foremost- love myself as I am.

Women and men need to understand that beauty is nonsense. Our character determines our destiny. Today people are looking for the trivial, not the real thing. Most girls want a man with a car and an apartment; as long as he has money, no matter what or who he is, and most men are looking for only the external. They may say they are looking for a serious relationship, but when you meet with them and talk to them about the future, they turn silent or disappear. They prefer to find a pretty guy for a one-time connection.

In the end, what really helped me get out of the depression was music. A guy named Doron Orsiano suggested that I write my story and turn it into a song, and this is how the song “Yihiyeh Tov” written about Liz Z”L was born: ‘and there’s a girl who will never grow up, I’ll remember her forever, and no one can bring her back, with that I’m left alone.’

Since then I’ve started studying singing with a voice coach and this week my third single came out: “Breaking the Code”. I plan to break out in a big way. Always remember that the sky is the limit. It’s true, life just is not just honey, but we’re the ones who run our own lives and make them what we want them to be.