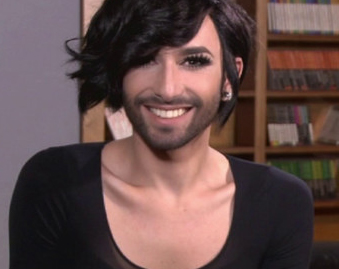 Days before Israel chose its next Eurovision contestant from reality TV music competition “Rising Star,” Israeli Channel 2’s Nadav Borenstein interviewed Eurovision winner Conceit Wrust, AKA “the bearded lady.” Conchita talked about why she decided to go on stage with the beard, and the similarities between her and Israeli Eurovision winner, Dana International.

“People are asking me why do I have to keep the beard, and wouldn’t it be better without,” Conchita said in her first ever interview for Israel, “but I realized that I can do so much more with being a bearded lady than just being on stage and singing, because, as simple as it can get, because I feel beautiful. I feel comfortable with the beard, I think it fits my face, and it fits the whole make-up and the lashes and the wig, and that’s why I kept it.”

“I never thought of asking somebody if I could do it because it’s my life, you know, and I think we all should think that way, make it as fabulous as you can because you only got one life, and if you’re not hurting anybody you can do almost anything.”

Going on stage with a beard, Conchita knew that a bearded lady is not a common thing, and that it will make people talk, which is exactly what happened. “I think that one of the things that are missing in our society is that people stopped talking to each other,” she says, and I realize that even if you don’t know me, once you see me you talk about me, because you go home and say ‘guess what, I’ve seen a bearded lady today, what do we think about that?’ and I think that that’s so important just to talk about stuff and create your own opinion.”

In the interview, Wrust was asked about Israeli transgender singer Dana International, who won the Eurovision back in 1998. “Her story is very similar to mine,” she said,  “we both had to take so much hatred before the Eurovision, and many people didn’t want us to be on this stage, so she knows exactly how I felt and how it was. She is definitely a very very important figure for the LGBT community.”

But unlike Dana, Conchita identifies as a drug performer, not a transgender. “When it comes to my private time I don’t wear lashes and wig,” she says. “When I have a day off I’m just Tom, and nobody recognizes Tom, and that’s a great thing. I take the bus, I go on the underground, go for a coffee with my friends and nobody cares about me and I love it. But on the other side, I love to be in the center of attention, so I just love both sides.”

Watch the full interview with Conchita below: