The start of TV’s Fall season features Israel in two shows. Amazon’s  “Transparent” is largely set in the country, and explores issues of identity and sexuality, including the “Pinkwashing Machine” episode. Conan O’Brien has an hourlong special based in Israel. O’Brien uses his charming ‘idiot abroad’ shtick to poke gentle fun at Jews, Palestinians and mostly himself. 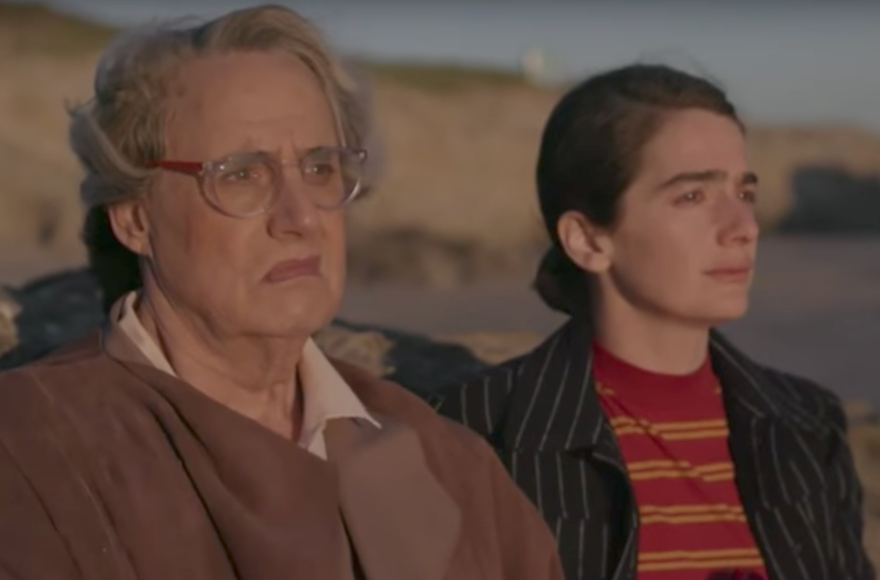 A scene from the fourth season of “Transparent” featuring Jeffrey Tambor, left, and Gabi Hoffmann in Israel. (Screenshot from YouTube)

As Season 4  of “Transparent” begins, Maura Pfefferman, the transgender matriarch of the show’s distinctly Jewish family, is invited to Israel to deliver a lecture on gender and the Cold War. Pfefferman’s youngest daughter, Ali (short for Alexandra), accompanies her.

Ali is a grad student, and it is through her perspective that the show relates the Palestinian experience. A feminist activist scoops her up in front of the Tel Aviv Hilton (having declined to spend money in Israel in deference to the boycott), and brings her to meet a Palestinian friend at a hip cafe in the West Bank city of Ramallah.

Next stop is a nearby farm, where attractive young Palestinians (and at least one pro-Palestinian Jew) share their experiences. A gay man explains that he was jailed in Israel (he doesn’t say why) and that his jailers threatened to out him to his family. A Canadian-Palestinian says that Jews in the Diaspora have more claims to citizenship in the land than the Arabs who actually live there. Another says, “We can’t breathe, can’t move, can’t go to the next city.”

The episode, tellingly, is titled “Pinkwashing Machine,” an allusion to the charge that Israel asserts its positive gay rights agenda to distract from its oppression of the Palestinians.

Read the full article in the JTA