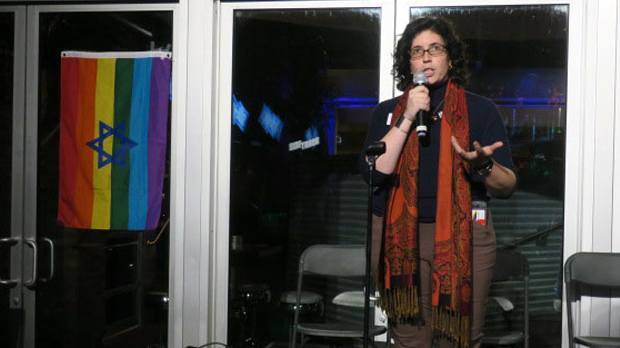 On October 25, an enthusiastic crowd gathered at the bar Sidetrack in Chicago to address how we can support LGBTQ Rights in Israel. The evening began with socializing, drinks, and nosh – followed by a panel discussion. 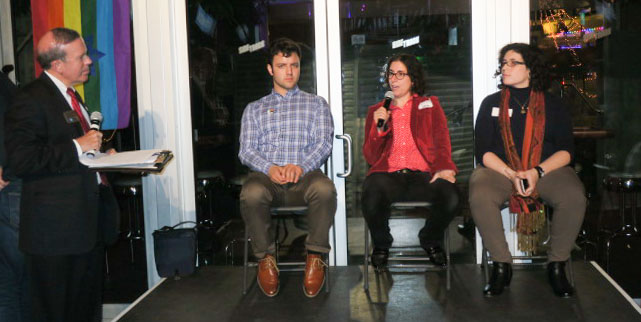 The discussion featured A Wider Bridge Staff Laurel Grauer who generated worldwide attention on the intersection of LGBTQ rights and Jewish rights within progressive communities, Jordan Schwartz who leads A Wider Bridge’s development operations around the country, and Ronit Bezalel who is a writer, documentary filmmaker and recently returned from three months in Jerusalem.

The panel was moderated by the Honorable James A. Shapiro, a long time advocate for LGBTQ Rights, Jamie has practiced law for over 32 years and is a current board member of IL’s ADL – Anti-Defamation League.  James introduced the participants and then read audience questions.

Ronit fielded the first question about LGBTQ life in Jerusalem. She noted that there was more openness towards the LGBTQ community than in the past. The Jerusalem Open House has been steadily fighting for LGBTQ rights and there is more queer visibility, especially during pride.  Attendance at Jerusalem pride has skyrocketed since the 2015 march, when 16-year old Shira Banki was murdered at the march. Many of the people attending the march are allies, especially people from differing religious communities. There are still battles to be fought in a conservative city like Jerusalem, but there has also been progress.

Jordan answered a question about Israel’s track record of LGBTQ rights in comparison to the rest of the region. He noted that yes, Israel does have a better track record, but the bar is quite low when surrounding countries still criminalize homosexuality and see it as a disease. Jordan said that we should work on raising the bar for LGBTQ rights. Jordan also was asked about same-sex marriage in Israel and remarked on a poll that came out this summer which indicated the majority of Israelis favored the legalization of same-sex marriage.

Laurel highlighted similar challenges that face the LGBTQ communities of the United States and Israel, and noted opportunities where both could learn from, and support one another. She then gave a careful explanation of the history of pinkwashing, and illustrated how this contentious narrative denies people the opportunity to understand and support Israel’s LGBTQ community. She talked passionately about her experiences at Creating Change in 2016, and being asked to leave the Chicago Dyke March this summer and told that she couldn’t display her Jewish pride flag, a flag she’d marched with previously for ten years.

Though it was clear there were people from multiple perspectives in the room, audience members were quite moved by the event and applauded the work of A Wider Bridge.