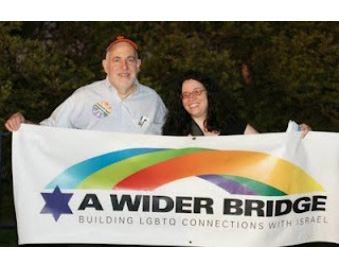 I returned about a week ago from an amazing two weeks spent in Jerusalem and Tel Aviv. I was there to meet with many of the people that will be part of the LGBTQ trip to Israel in November 2011 and also to develop opportunities for people and programs that A Wider Bridge could bring to the U.S. in 2012.
I met with LGBT political leaders and activists, three leading gay filmmakers, a lesbian comic strip artist, LGBT religious groups, and leaders of LGBT youth groups and LGBT social service organizations. I was there at an historic moment of people taking to the streets: for the marches and rallies that marked the second anniversary of the shootings at the Bar Noar, and to be part of the great masses of Israelis that are mobilizing across the country in a movement for social justice.
Throughout the trip, I found myself dividing my time between celebrating “the Israel that is”, especially its vibrant LGBT communities, and walking together with Israelis who dream of “the Israel that can be.” It is a tribute to the country and the people that one can find so much to love there and to be proud of, and yet find so many people dedicated to making it a better place, a more just place, and a safer place for all its people. And it is a remarkable time to visit, with history being made on the ground in so many ways.
Here are some highlights from both aspects of my time there.

—  I began my stay by visiting the offices of Jerusalem Open House (JOH), where I participated in an “English-speaking” discussion with a group of young queer Jews from Israel and all over the world. We talked about the way queer struggles intersect with other struggles for human rights and social justice. And about all the different and complex experiences that people have as they “come out” about different parts of their identities: as LGBT, as Zionists, as Jews, as radicals. It was a fascinating conversation, and a great prelude to the next day’s Jerusalem Pride March.

— The Jerusalem Pride March: Organized by JOH, this march drew about 5,000 people on a walk from Independence Park to a rally on the lawn outside the Knesset. A friend and I carried the banner for A Wider Bridge through the streets of Jerusalem. The theme of this year’s march was “our interconnected struggles,” ad the crowd was spirited and hopeful. Police protection for the march was strong, and signs of protest were few, though I did get my first experience of walking through an area that had been hit a few minutes before by a “stink bomb.”Ugh! You can see some photos of the march here.

— I spent my first Shabbat at a prayer service and dinner organized by my friends in Havruta and The Pride Minyan, two of the LGBT Orthodox groups in Israel. We davened in the open courtyard of the Shalom Hartman Institute, and could see the sky fade from twilight to night as we welcomed Shabbat. These groups are strong and growing, and are providing an important place for religious LGBT Israelis who want to honor both their religious and LGBT identities.

— Danny Savitch is a good friend and Executive Director of Kehilat Kol Haneshema (KKH), the leading Reform Synagogue in the Jerusalem, that recently had its second annual Pride Shabbat. KKH is a wonderful community to pray with when one is visiting Jerusalem. We will be welcoming their Rabbi, Levi Weiman-Kelman, to the San Francisco Bay Area early in November. I met with Danny and Noa Sattath, also a member of KKH, now a rabbinic student at HUC, and the former Executive Director of Jerusalem Open House. (Noa is in the photo with me at the top of the blog.)

— Israel produces more quality queer cinema than most countries of the world, and in one afternoon I met with three of its leading and award winning gay film directors: Yair Hochner, who also produces the Tel Aviv LGBT International Film Festival, Tomer Heymann, whose work was recently shown at both the San Francisco LGBT Film Festival and the SF Jewish Film Festival, and Yair Qedar, whose documentary “Gay Days” is a great history of the LGBT community in Tel Aviv. We hope to be part of bringing more of their work and those of other filmmakers as well, to the U.S. in 2012. And I met with Gilad Padva, a Ph.D. on the faculty of Tel Aviv University, who writes extensively about many aspects of queer Israeli cinema.

— The municipality of Tel Aviv provides support to the LGBT community in many ways, including support for the remarkable LGBT center situated in the middle of Gan Me’ir, a beautiful park, and the funding and coordinating of the annual Tel Aviv Pride Parade, which this year drew an estimated 100,000 participants. I met with Adir Steiner, who works for the mayor of Tel Aviv, and is primarily responsible for the city’s ongoing efforts in support of the LGBT community. Adir is himself an important figure in the history of the struggle for LGBT rights in Israel. You can read more here.

— I met with Nitzan Horowitz, the one out gay member of the Knesset, and a champion not only of LGBT rights, but of an Israel that is pluralistic and providing equal rights and opportunity to all its citizens. Nitzan introduced me to Mickey Gitzin, the lead staff person of Be Free Israel, one of the organizations at the center of the current demonstrations for social justice. In their words: “We encourage religious pluralism, combat political inequalities and social discrimination, and defend democratic values.” Among their initiatives, Be Free Israel has led the campaign for civil marriage in Israel, including same-sex marriage. Take at look at their creative campaign video.

— Mike Hamel is the Chair of the Board of The Aguda, (note as of 2012 : current Chair is Shai Doitsh)  Israel’s oldest LGBT organization, and Anat Avissar is their new Development Director. The Agudah provides a broad range of social services to the LGBT community in a network of offices throughout the country. Mike will be visiting the U.S. before the end of 2011. The Aguda organized the memorial at the LGBT center on Saturday, August 6, marking the second anniversary of the shootings of the Bar Noar. The crowd of aobut 2,000 people was addressed by speakers that included Tzipi Livni, Nitzan Horowitz, the mayor and vice-mayor of Tel Aviv, Mike Hamel (chair of the Agudah), city council member Yoav Goldring, and Ayala Katz, the mother of Nir Katz, one of the youth counselors murdered in the shooting. Ayala came on stage along with one of the teenagers injured in the shooting, who spoke from his wheelchair. The theme for the event was “Going Forward with Pride, and the speakers addressed many issues, including the need for all of Israel, not just Tel Aviv, to be a safe place to be LGBT, and the failure of the government to address some of the most pressing needs of the community. Several well-known artists provided music for the event, including Yehuda Poliker.

— In Tel Aviv, I had the privilege to spend time with lesbian comic strip and graphic artist and writer Ilana Zeffren. She has a weekly comic strip in “Achbar Hair,” a popular Tel Aviv magazine, and is often published in Ha’aretz. The main characters in her strip are she and her partner and their two cats. You can see some of her work here. And really, how many cities in the world have a well-known lesbian comic strip?

Part Three: Scenes from a Revolution? Rallying for Social Justice

— A new spirit has been awakened in Israel, as hundreds of thousands of people have taken to the streets demanding change and social justice. On Saturday evening, August 6, I joined with close to 300,000 others at a rally on Kaplan Street in Tel Aviv. You can see some photos here. The protests are, on the surface, about things like the high cost of housing and food, and the growing inequality of income in the country. But I came away with the view that something even more fundamental was at their root, a sense on the part of many that the country had lost its way, that the government has lost touch with some of the values that have been part of Israel and given it strength since its outset. Revolution is likely too strong a word to describe what is happening, but this is a massive peaceful movement bringing all segments of Israeli society out into the streets demanding change and social justice. It is not just the “left” out in the streets, but a broad spectrum of the Israeli middle class. It’s too early to know where it is all heading, but I came away feeling very hopeful about the future of the country and with enormous respect for the people working to bring about change.

— “A person gets up in the morning, and suddenly he feels like he’s a nation, and he starts marching…” That’s the song Shlomo Artzi picked as the first song in his performance at the end of the rally. It describe the sense of empowerment people feel here. (Thanks to my friend Eyal Liebermann for this.)

Since my return, the south of Israel has rocked by multiple terrorist attacks. Our thoughts and prayers go out to all the victims and their families, and all those in Israel who put themselves in harm’s way to keep the country safe. For the moment, social protest rallies have been transformed into vigils, but the leaders of this movement are determined to keep the momentum of their cause moving forward. Security and social justice can be pursued together.