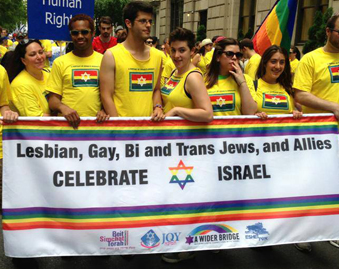 On Sunday, May 31st, from 11AM to 4PM join A Wider Bridge, Keshet, CBST, Eshel, JQY and Mosaic of Westchester as we proudly march up Fifth Avenue in the Celebrate Israel Parade. Join our official Facebook page to get connected, and for news and updates on the event.

The Parade will go up Manhattan’s Fifth Avenue from 57th to 74th Streets. This year, the LGBT cluster has been honored with a spot at the front of the parade so that means that our line up time is an EARLY 10:30 AM.  We will be assembling on Fifth Avenue between 54th and 55th Streets.  Most likely we will step off shortly after 11:00.

In order to get the official 2015 LGBT cluster t-shirt,  you must email your RSVP to joseph@awiderbridge.org.  (We ran out of t-shirts last year and we are increasing the order but they will go to people who pre-registered first.)

What can you do to help? Great question!

The founders of Israel had a dream. They imagined a vibrant, independent and Jewish state that would not only be a haven for Jews from all over the world, but also one that would incorporate the best characteristics of its citizens: brains and brawn, creativity, determination, fairness and imagination – a state whose greatest natural resource is its people who could imagine that future – one that would benefit the whole world! Today’s Israel is a result of that dream. We invite you to use your imagination and creativity to highlight some of the things that Israel imagined and continues to imagine – some that have come to fruition and some still to be achieved.