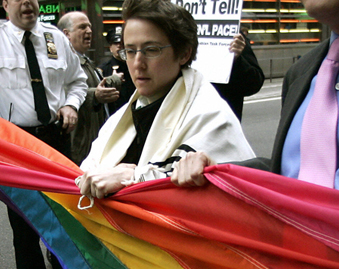 Late last week, Tablet magazine published a lengthy article by James Kirchick about CBST’s policies and attitudes on Israel, that was soon followed by a reply from the President of the CBST Board. Here is both the original article and the reply.

On Aug. 12, Bryan Bridges posted an open letter on his Facebook page announcing his resignation from the board of Congregation Beit Simchat Torah (CBST, located on Bethune Street), New York’s oldest and largest synagogue serving gay, lesbian, bisexual, and transgender Jews. “Recent events have demonstrated that CBST is far more committed to a progressive political agenda than to the Jewish people,” he wrote. The synagogue’s “agenda” had come to encompass open hostility to the Jewish state, Bridges alleged, a fact made all too clear in the wake of Israel’s Operation Protective Edge.

Bridges went on to offer a litany of examples as to what motivated him to leave CBST: The synagogue’s Facebook page included a link to a fundraiser sending potatoes to Gaza, while failing to post information on similar efforts benefitting Israelis. Shabbat services were regularly being “hijacked by a political agenda.” Last year, after another congregation canceled a panel discussion featuring two anti-Zionist activists who back the Boycott, Divestment and Sanctions (BDS) movement against Israel, CBSTswooped in and provided the event with a room and institutional sponsorship. The culprit in Bridges’ telling isRabbi Sharon Kleinbaum, CBST’s senior rabbi and a big-time macher in the world of progressive Judaism.

Normally, a synagogue board member resigning over a political disagreement with the rabbi would not make news, but Bridges’ stepping down has garnered attention beyond the New York gay Jewish community. No doubt, this has something to do with the high-profile nature of CBST’s role as the country’s largest and most prestigious gay synagogue, as well as Kleinbaum’s stature as a prominent rabbi at the intersection of the Jewish, gay, and left-wing activist worlds. Named to Newsweek’s list of Top 50 Most Influential Rabbis, Kleinbaum is half of a leading lesbian power couple; her partner is American Federation of Teachers president Randi Weingarten. She counts actress Cynthia Nixon (who has spoken from the CBST bimah) and former City Council Speaker Christine Quinn (who last year presented Kleinbaum with a proclamation marking her 20 years as a rabbi at CBST) as pals. New Yorkwriter Frank Rich—whose visage, under a kippah, can be seen on the CBST homepage—is one of several high-profile congregants.

When it was founded in 1973, CBST had just 100 members, nearly all of them gay men. Today, due in no small part to Kleinbaum’s charismatic leadership, the synagogue boasts over 1,100 adult members (nearly double its size just five years ago), many of them women, and many of whom are heterosexual. Its High Holy Day suite of services at the Javits Convention Center attracts thousands of people. CBST is in the midst of a massive capital campaign to construct a new synagogue in a space it purchased several years ago on 30th street.

Kleinbaum’s public statements throughout Operation Protective Edge placed a heavy emphasis on the suffering endured by Palestinian civilians in the Gaza Strip, which did little to alleviate a growing sense of isolation felt by supporters of Israel during the recent conflict. Her reading the names of Gazan casualties at a Friday night service—which to Bridges was redolent of “saying Kaddish” for them—was particularly provocative to some congregants. Even though she also recited the names of fallen Israeli soldiers, the whole exercise was conducted in a sort of moral haze; her intention seemed to place blame equally on both sides as if there was not an actor (Hamas) primarily responsible for the carnage. Given the terror group’s strategy of firing on Israel from hospitals and schools and surrounding its fighters with civilians, Bridges alleged, this “was essentially delivering Hamas propaganda. … My partner and I are starting a family and frankly I don’t want to raise my kids in a synagogue that’s praying for people firing rockets.”

For the last 40 years, Congregation Beit Simchat Torah, the largest LGBTQ synagogue in the world, has been a vibrant spiritual community and a progressive voice within Judaism. Passionate, provocative, and deeply Jewish, CBST champions a Judaism that rejoices in diversity, denounces social injustice wherever it exists, and strives for human rights for all people. We are committed to Israel and engaged in supporting efforts to secure peace, justice and equality for all.

Over the last 40 years, CBST has welcomed lesbian, gay, bisexual, transgender and queer (and straight) Jews who join together for prayer, community, and social justice work.Through our Shelter of Peace, we have advocated vigorously for the housing of homeless children and teens. Through the Chesed (“lovingkindness”) group, members care for the ill, elderly, and grieving within the community. Rabbi Kleinbaum has spoken vigorously on the national stage for marriage equality, for racial equality, economic fairness, and for legislation to improve the lives of all Americans and of Jews all over the world. To diminish that holy work in the face of controversy is to do this thriving community a great disservice.

The August 21 article by James Kirchick regarding CBST was both disappointing and misleading. Even disregarding the many factual inaccuracies, the article misrepresents both CBST’s position on Israel and the tone of community within the congregation. CBST strives to be one of the few places in which a strenuous, nuanced, and—above all else civil–conversation can happen concerning what it means to be Jewish and engaged with Israel at a time of such great turmoil and pain.

After Friday night services on Aug. 15, a group of more than 100 CBST members and non-members gathered to share their views on the conflict and on the controversial reading of the names of Palestinian children under the age of 18 killed in the current conflict. Views varied widely. Which is just as it should be; expecting that 1,100 members will take an identical position on such a complex, emotionally-wrought, and enormous issue is unrealistic, and would shut down this necessary debate. As I said to the group: “Very few synagogues allow such a wide-ranging discussion as ours does. We can be deeply in support of Israel and not love everything that happens there. There is no single view.”

There is no single “CBST” view on the conflict. Rabbi Sharon Kleinbaum and the other CBST rabbis, the board, the members, and the community as a whole have varied and evolving views. We can be vital supporters of Israel and still question its policies. If we did not question, if we did not debate, if we did not call ourselves to a strict self-accounting, we would not be Jews.

This conversation has not torn CBST apart. It is bringing us together, in conversation, in action, and in prayer.

We mourn for all the victims of this war, while working for peace and for civil discourse among American Jews—whose voices and financial backing have a tremendous impact on the events in the Middle East. Reading aloud the names of Palestinian children who were killed, along with the names of fallen IDF soldiers, can in no way reasonably be viewed as “delivering Hamas propaganda.” It is exactly this kind of un-nuanced, divisive reductionism–designed to shut down dissenting voices, rather than to add valuable insight to the conversation—that we seek to avoid.

When we stop shouting, we can start talking. CBST will be continuing this conversation through a number of channels, including through a series of conference calls with members of the Knesset, rabbis, LGBTQ activists, and CBST members who have made Aliyah. We welcome all voices in this ongoing–and crucial–conversation. Join us as, together, we do the essential work of tikkun olam–a healing of our beautiful and broken world. 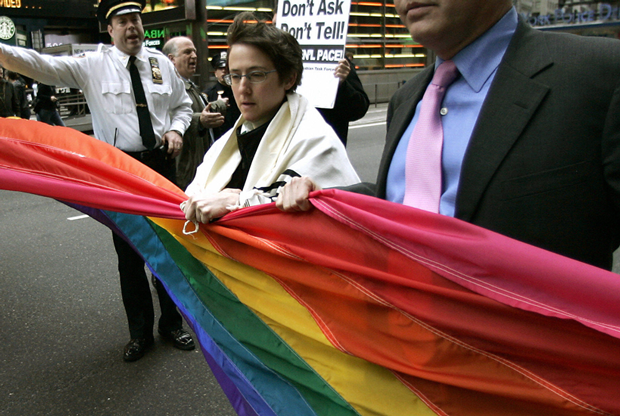