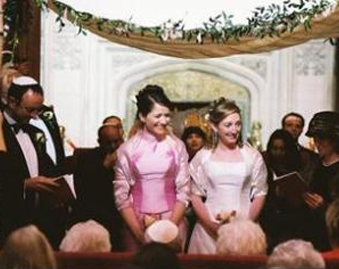 Masorti rabbis in the UK perform a new kind of ceremonies for same sex weddings. Ceremonies will be known as Shutafut (partnership) or Brit Ahavim or (covenant of lovers), to differentiate them from Kiddushin, the traditional Jewish marriage rite. 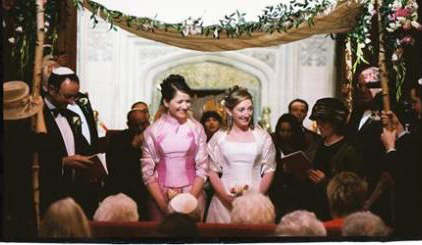 For 15 years Natalie Grazin and Samantha Cohen have been stalwarts of the New North London Synagogue, the country’s largest Masorti congregation.

They helped to found the egalitarian minyan Assif. They have a boy and a girl who attend Jewish primary school.

The couple, who met at Limmud in 1997, formally pledged their commitment to each other in 2005 in a brit ahavah, a covenant of love.

While it resembled a wedding with rituals such as the chupah and breaking the glass, it was a private affair.

But now such couples will be able to enjoy a public ceremony after Masorti leaders last week agreed that their rabbis could officiate at same-sex unions.

The new ceremonies will be known as shutafut, partnership. or brit ahavim or ahavot, covenant of lovers, to differentiate them from kiddushin, the traditional Jewish marriage rite.

Couples will be able to register as married under English law. Ms Grazin, 41, a management consultant, said: “For the considerable number of Masorti people who are LGBT [lesbian, gay, bisexual and transgender], that gives them the opportunity, as is available to everybody else, to have the event in their own shul with their own rabbi.

“There are many younger people who have been waiting for it in order to find out whether the movement sees them as people of equal value.”

Continue reading on The Jewish Chronicle