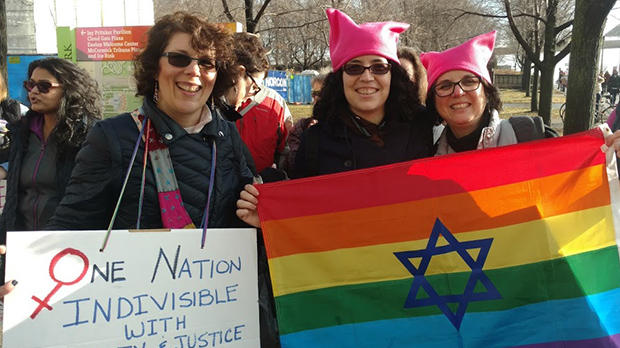 Following the Chicago Dyke March incident in June, the staff of A Wider Bridge embarked on a dialogue tour, answered questions and engaged in conversations with leaders from dozens of LGBTQ and Jewish organizations and communities. Midwest Manager Laurie Grauer describes one of the dialogue groups that took place in Chicago.

“I invite you to have brave conversations in this space,” remarked Rabbi Shoshanah Conover.

On August 3rd, I sat in a circle, room with more than forty people. All of us came together following the Chicago Dyke March to find common ground. That’s not unreasonable given the space we were in. The meeting took place at Temple Sholom of Chicago, in a room called the “Beit Midrash”, or “Hall of learning”. Both the Temple, and the room, are home to the oldest LGBTQ congregation in Chicago. As she continued, Rabbi Conover went onto explain that a brave conversation is a difficult one, but one that needs to happen, even if it feels uncomfortable, in order multiple sides to move towards resolution, or, at the very least, start on the path towards one.

“I invite you to listen to one another,” she continued.

In the days, weeks, and months following the Chicago Dyke March incident, the staff of A Wider Bridge embarked on a dialogue tour, reaching leaders from dozens of LGBTQ and Jewish organizations and communities. We answered their questions, heard their concerns, and explored opportunities to work together and forge ahead. The tour culminated with Rabbi Conover and LGBTQ community at Temple Sholom.

“I invite you to be present.”

Participants varied in age, sexual orientation, gender expression, and religious affiliation. Yet, all here because wanted the same thing: to listen, learn, and most of all, to belong in a community that was built on inclusion.

“And from this conversation, let us move forward together.”

As the mic passed from hand to hand in the circle, participants shared their frustrations with the current political climate in Chicago, the U.S., and Israel. Many spoke of times they have felt excluded or harassed for being too supportive of Israel in LGBTQ circles. Others felt their love for Israel stifled because of their questioning of the actions of the Israeli government. Others still remembered a time when they could have lost their friends and family for being Jewish and gay, and no longer wanted to have to choose. Despite the painful stories that were shared, there was palpable sense of hope that filled the room towards the end. We realized that each us in our own way can take steps to create positive change in our political discourse and social justice initiatives.

For A Wider Bridge, these steps are engagement, advocacy, and philanthropy.

These steps are built into our work with the LGBTQ communities of Israel and the US. By engagement, we mean person-to-person connections between LGBTQ and allied North Americans and Israelis. Even in cases of initial disagreement, we focus on shared empathy, building relationships, and finding common ground.

With advocacy, we build partnerships with leaders and communities committed to advancing LGBTQ rights in the US and in Israel. We know that our communities are stronger and more capable of advancing shared goals when they stand together rather than apart.

Lastly, with philanthropy, A Wider Bridge raises resources and funds that directly aid our LGBTQ partners in Israel – because we see their work as key in advancing political, communal, and cultural change within the region.

As the evening drew to a close, everyone got up, and shook hands with one another; some even hugged. It’s too early to say what the exact impact the discussion that took place will have within the Chicago community. However, an email I received the following day gave me some insight. Though the they asked to remain anonymous, the did give permission to publish their letter. It reads as follows:

I wanted to just express my gratitude for welcoming me into this space. I feel so fortunate to be able to be to listen to all the important thoughts and conversations that were shared this evening… I am certain you may have been a little nervous coming into it. I’m proud of you for not shying away from these uncomfortable and difficult conversations!

Also, Tyler … spoke so well to why I’m passionate about the work I do and how we as the LGBTQ community need to work together to grow and heal. The incidents surrounding Creating Change and Dyke March are such frustrating examples of the community cannibalizing itself. It drives me mad that we can’t set differences aside in order to band together and fight the TRUE opposition. Intersectionality, as I understand it, is about authentically inviting all communities to the table so that we can learn from each other and be stronger together. Allies are crucial in our work, in whatever form they come in, we can not win without the support from outside our own community. We can not shut out entire swaths of people for not fitting a mold we call “the correct LGBTQ community member.” That is the opposite of intersectionality and is so extremely short sighted.

For example, this evening’s event could have easily been billed as something for only the Jewish community to attend. Instead, I was welcomed and invited to share in the space… I learned so much and that is invaluable.