Blue and White Pride is a new group that seeks to counter growing resistance to LGBT people and women in the Israel Defense Forces. A Wider Bridge’s Leadership Mission alum Michael K. Lavers had the chance to speak with Omer Nahmany, the group’s founder, late last month. 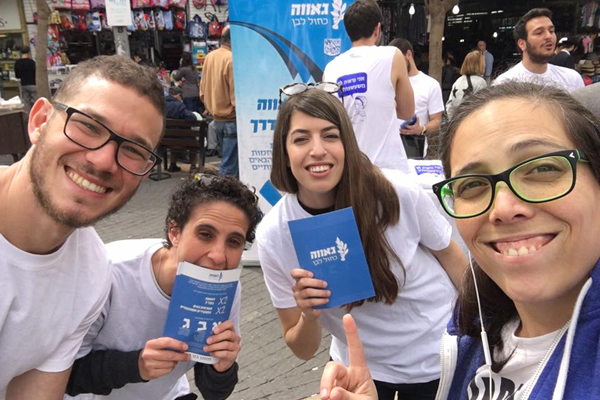 Omer Nahmany, first from left, is the founder of Blue and White Pride, an organization that seeks to counter efforts that are challenging the presence of LGBT people and women in the Israel Defense Forces. (Photo courtesy of Omer Nahmany)

A new group seeks to counter growing opposition to LGBT and female soldiers in the Israel Defense Forces.

Blue and White Pride describes itself as “a movement of Israelis, men and women, who serve in Israel’s security forces, both as conscripts and in the reserves, and want to maintain the IDF as a meeting point for Israeli society.” The group also seeks to strengthen “the values of the IDF and those serving” against the backdrop of “anti-liberal forces trying to stop” the integration of women, LGBT Israelis and other minorities into the military.

Blue and White Pride in February launched a media and public education campaign that highlights the importance of LGBT people and women in the Israeli armed forces.

The group has raised $20,773.20 (NIS 76,262) so far. Omer Nahmany, a gay IDF reservist who founded Blue and White Pride, told the Washington Blade late last month during a telephone interview from Tel Aviv that his group hopes to raise additional funds.

“We see the army as a microcosm of what Israeli society is going to look like,” he said.

Nahmany told the Blade he has previously mentored gay IDF soldiers. He said communal showers and homophobic remarks from other servicemembers are among the issues with which they struggle.

“For some soldiers it can be very offensive,” said Nahmany. “We are here to help them. It’s like a big brother program.”

Nahmany told the Blade on Wednesday the organization “seeks to enhance and develop the ‘commune service’” of LGBT and women who are in IDF combat positions. He noted Blue and White Pride also seeks to highlight religious and extreme right organizations that “try to effect the army and push women out of combat positions and LGBT (people) out of the army.”