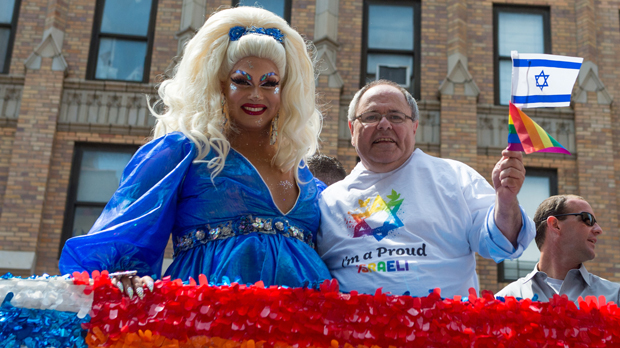 The New York Pride Parade ended Pride Month with a huge celebration. Among all the happy, colorful celebrants, it was hard not to notice one truck waving blue and white flags. On the truck, along with other celebrants from the community, was Israel’s Consul General in New York, Danny Dayan. 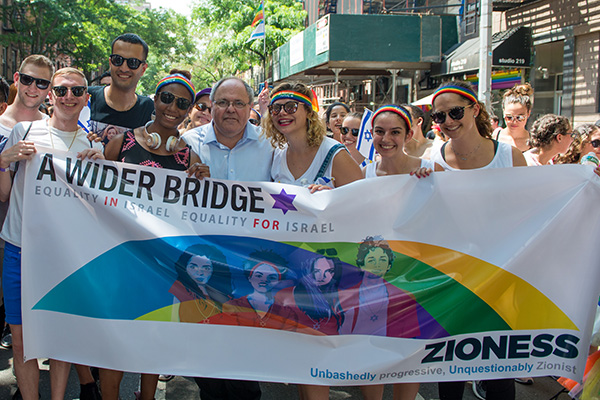 Israel was one of the three countries to be represented in the parade. Last year, Israel also led a special delegation to the march, but without the consul. This year, along with the reality TV and web stars Alexis Michelle and Yuval David, with DJ Omri Angel playing a live set on the truck, Dayan waved a flag, surrounded by consular workers and hundreds of LGBT marchers who support Israel and A Wider Bridge, a pro-Israel organization that works for equality of the LGBTQ community.

The Gay Pride Parade, which also took place in Israel a few weeks ago, began here in New York in the 1970s. It followed violent confrontations with the NYPD in protest of its homophobia and constant, ongoing violence against gay and transgender people.

The riots, known as Stonewall Riots, began on Saturday, June 28, 1969, at about 1 am, when the police raided ‘Stonewall Inn’ gay bar in New York’s Greenwich Village. The LGBT community began to gather and protest for LGBT rights and every year the riots are marked by pride parades in major cities around the world. Over the years, the events and activities around the parade have expanded and from one day a year to a whole month, which became Pride Month.

“Israel has in fact become a regular guest of the New York Gay Pride Parade,” explains Consulate spokeswoman Almog Elichis. “It was moving and powerful to see thousands of New Yorkers, locals, tourists, Israelis and others cheering for Israel on the side of the roads. The Israeli consulate in New York prepared for weeks to produce the Israeli float, and it was clearly shown in the end result: proud and colorful delegation.”

Last year, the consul canceled in the last minute his participation in the parade for security reasons. This year, he promised to attend and kept his promise. “What amazed me the most,” he said, “is the enthusiasm in which we were greeted by hundreds of thousands of people on the side of the roads. After all, it’s not the pro-Israel crowd at the AIPAC events. People at the roadside danced to Netta’s ‘Toy’ and Omer Adam’s ‘Tel Aviv’ that we played on the speakers. It’s important to note that we did not come to show that everything is perfect, we are marching in recognition that there is a long way to go ahead of us and that we strive for better. ”

Earlier last week, the Consul hosted a special VIP LGBTQ Pride Reception. The event was led by the Department of Public Diplomacy of the Israeli consulate in New York, with the aim of exposing the struggle for LGBT equality in Israel and move the communities closer. 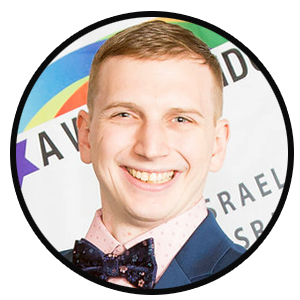 Quentin Hill of A Wider Bridge was one of the guests of honor who came to Dayan’s house. He is 25, originally from Iowa and only in recent years has discovered that he was actually Jewish. “I grew up in a small town in Iowa, and I came out at the age of 14. I quickly became an activist in the community and fought for LGBT rights. My mother grew up as an adopted child and in those years I wanted to know more and more about myself and what was actually hidden in our family history. I convinced her to take a DNA test and we discovered that my mother was Jewish. From that moment on I began to understand more and more about Judaism. I joined Hillel on campus, I went to Israel for Birthright, and I’ve had my bar mitzvah at the age of 19 in Jerusalem,” he says with a smile

“I learned more and more about the Jewish people and about Israel that flourished against all odds, in the most difficult region of the world, onto a prosperous democracy and I understood that these are the values ​​of the Jewish people and also mine. It filled me up with inspiration and showed me that I can draw a lot from it for the struggle of the LGBT community.”

Quentin joined A Wider Bridge and became a leading activist. “Last year I received a phone call from Consul Dayan and we had an honest conversation about the work that we want to do in the [LGBTQ] community in regards to Israel, which is becoming a very polarizing issue, even in the community. Our organization works both for Israel and the LGBT community in Israel, and we want to ensure that Israel is treated fairly in the American Jewish community,” Explains Hill. 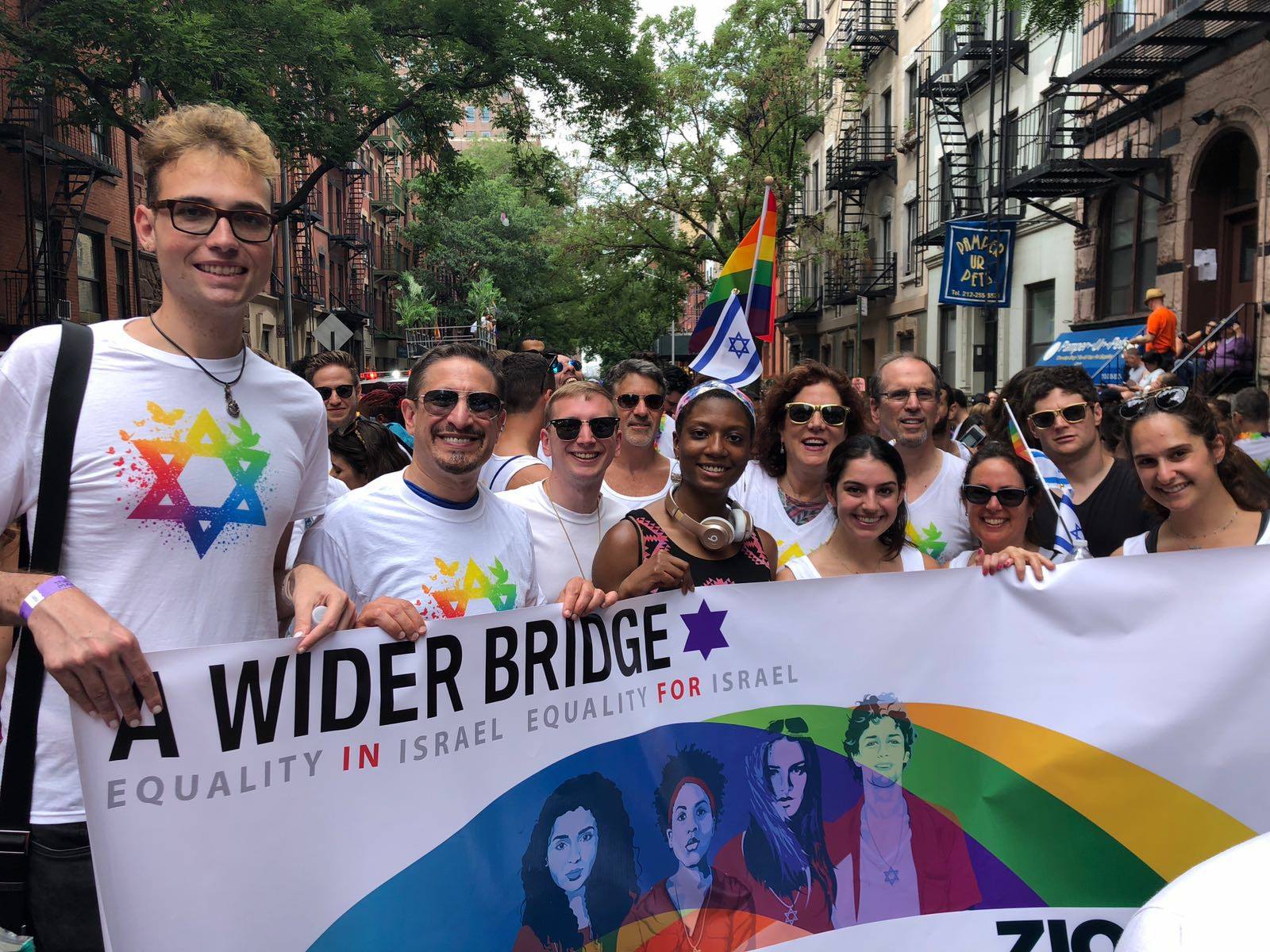 A Wider Bridge marches with Zioness and the Israeli Consulate Delegation marches during the annual Pride Parade in New York City.

“This is the second year we have been involved in the cooperation with the consulate, and this year it was amazing, hundreds of people. There was amazing support from the community that came to march with us and the fact that the consul was there was so important. First of all he is the first Consul General of a foreign country who’s doing it, but it’s not only that. We know that the Israeli government does not support the community, and the fact that a representative on its behalf came and expressed support was important and heartwarming.”

Quentin was particularly moved by the event at Dayan’s house. The event was attended by about 100 senior officials and opinion leaders from various LGBTQ organizations, both Israelis and New Yorkers. Among the speakers were Chen Arieli, chairman of the Aguda, Maya Arbel, transgender coordinator at IGY, and Alex Michaels – known as Alexis Michelle, a reality star from RuPaul’s Drag Race. Dayan moved the guests when he stated “The goal in Israel, in the US and in the world is absolute equality. Only if this achieved and until it will be achieved, the struggle, the march and the activism will not end. I am convinced that in the end we will achieve the goal and I believe that most Israelis share this view.”

Quentin notes the moment when Dayan spoke of his personal closeness to the community, describing the connection with the family of Shira Banki, who was murdered at the Gay Pride Parade in Jerusalem in 2015: “Shira Banki Z”L, whom I did not get to know, was murdered by a Jewish terrorist at the Pride Parade in Jerusalem three years ago. Before I began my role in New York I received a phone call from Shira’s parents who asked me to help perpetuate her memory in an educational way. Together we united forces of two completely different organizations, the Rabin Center and the Katif Center, to build an educational program called Shira Banki’s Way to promote tolerance in memory of Shira Banki Z”L.”

“His speech really moved me,” Quentin concludes. “And as the consul said, our march is not over until the members of the community receive all their rights.”