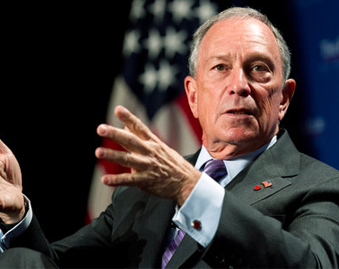 Michael R. Bloomberg donated $250,000 this month to support an effort in Maryland to do what no state has done so far: legalize same-sex marriage at the ballot box.

Mr. Bloomberg, a billionaire who attended college in Maryland at Johns Hopkins, dipped into his personal fortune to help persuade New York lawmakers to approve same-sex marriage in 2011, and he has supported a similar effort in New Hampshire. His contribution came after discussions with Maryland’s governor, Martin O’Malley, a Democrat who has spearheaded the effort to pass the referendum, known as Question 6.

“The fact that someone of Mayor Bloomberg’s national stature and recognition would care about our referendum campaign for civil marriage equality, I think, tells people all over our country that this is a serious and real campaign,” Mr. O’Malley said in an interview on Thursday evening from Kentucky, where he was attending the vice-presidential debate.

Mr. Bloomberg, an independent, often speaks passionately about his support in the fight for same-sex marriage, which he considers a significant battle for expanding civil rights. Voters in three other states — Maine, Minnesota and Washington — will also weigh in on same-sex marriage on Election Day, offering a test of popular sentiment on an issue that has never been approved by a popular vote.

Read the full article in the New York Times