A Wider Bridge’s Israel community manager Shani Segev gives us an update on what’s been happening lately in the community. 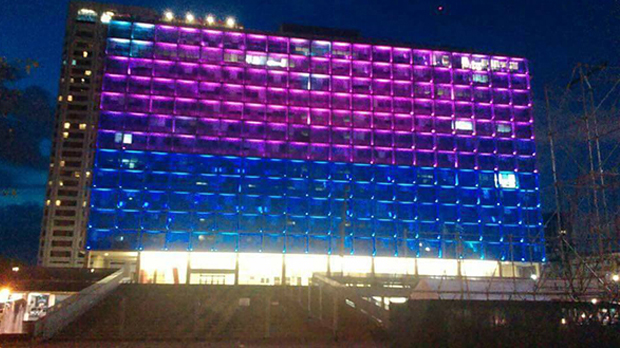 Tel Aviv City Hall lights up in the colors of the bisexual flag.

Tel Aviv is getting ready for Pride: This week the Tel Aviv Municipality hang rainbow flags around the city, and many websites all over the world are already reporting on this event being the first parade in the world with a bisexual theme! So that’s really exciting. Yesterday the city hall hosted leaders of the LGBTQ community for a toast to kickstart Pride Month in Tel Aviv, that takes place throughout the month of June. The Tel Aviv City Hall was then light up in the colors of the bisexual pride flag.

At the end of last week A Wider Bridge reported on the launch of the new LGBT Medical Association in Israel- this is a very big deal here. It’s known in the Tel Aviv community that there’s a Clalit clinic near Gan Meir, where Dr. Gophen and Dr. Wagner work, a clinic that is very friendly to LGBT people, and especially to transgender people. But to have an actual association that works solely for the health benefit of the community is something that we needed for a long time.

Personally, I’m focusing right now on the visit of Evan Wolfson, leader of The Freedom to Marry, to Israel in a few days, and on making his visit a great success here. Since being “gladly” put out of work, the lawyer has travelled the world helping activists in other countries. He just recently came back from Australia, where his visit made an incredible remark. Taiwan, another country he worked with, ruled in favor of gay marriage this week. As he turns his sights to Israel now (even though it’s not his first time here) he said that he will be “working to establish civil marriage for both gay and non-gay couples, ending an anomaly and injustice unworthy of a democracy such as Israel.”

We organized a series of meetings, a lecture and discussions for Mr. Wolfson here, right after which he will join A Wider Bridge’s annual LGBTQ leadership mission, which begins May 30, and about which I’m sure you’ll be hearing quite a lot, since we have a very special figures participating this year.

Last but not least, a new association, MAI (Hebrew abbreviate of Israeli Asexual Awareness), or “Israeli Aces,” has officially joined the Aguda. MAI is a first of its kind group in Israel for asexual people. Asexuality is the lack of sexual attraction to anyone, or low or absent interest in or desire for sexual activity. MAI offers a warm and understanding place for people on the asexual spectrum, as well as lectures and workshops in order to promote awareness and discussion on asexuality.

MAI is the 5th association joining the “greenhouse” of the Aguda, after the Bi-Pan-Poly Forum, Beshela, Education Pride (LGBTQ Educators) and Pride Blue and White. You can contact MAI through its recently-launced Facebook page.