Following his public support of his lesbian spokeswoman, Bennett was blasted by his right-wing party extremists colleagues for ‘moving to the center’, warning him will alienate party’s base. 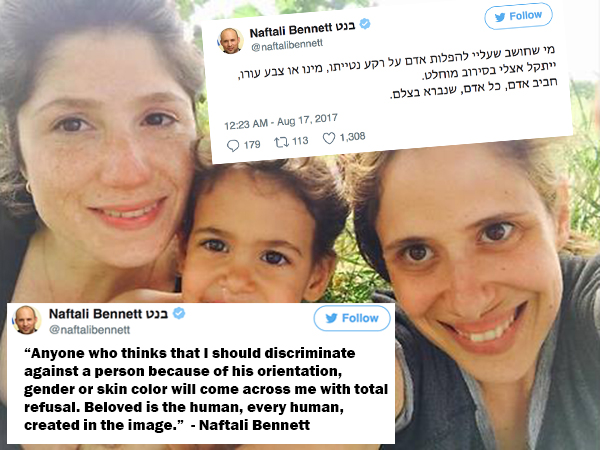 On Thursday, Orbach said that “the National Religious know how to respond in a variety of accepting ways to complex public issues. We’ve always known how to be a community which builds connections. Specifically when it comes to LGBT issues, we fail time and again, falling into pits which we once knew how to avoid.”

“There is, and there must be, a determined fight against a movement which aims to uproot the family unit, and together with it the very morals and ethics upon which Judaism is founded,” Smotrich said. Read the full story on Israel National News

Agriculture Minister Uri Ariel (Jewish Home) blasted party chief Naftali Bennett, accusing him of pushing the Jewish Home party to the center and away from the party’s base of support. “From a political standpoint, this is a serious mistake on Minister Bennett’s part. He won’t get any votes from hipsters in Tel Aviv or from same-sex couples. There are others who get those votes – the Likud, Yair Lapid, and Moshe Kahlon,” Ariel said. Read the story

There was criticism against Bennett from the side of the LGBT community as well. Gay TV host Assi Azar attacked Jewish Home leader, claiming that he is acting intensively against a law which would allow LGBT couples to adopt children. “They can work for him, but they can’t get equal rights,” Azar said. Read the story