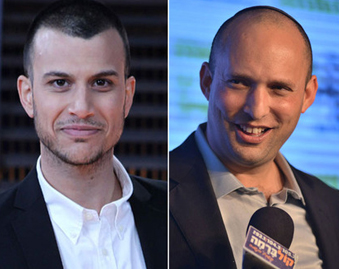 Naftalie Bennett and gay TV presenter Assi Azar talk same-sex rights over Christmas dinner; Azar: I tried to explain the historical opportunity he has with regard to equal rights and gay rights in Israel. 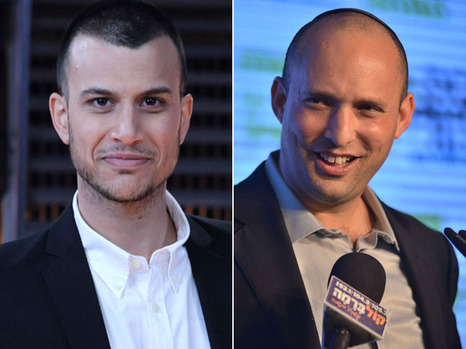 The legislative initiative to extend tax breaks to same-sex parents was on the menu on Christmas night, when Economy Minister Naftali Bennett met with gay TV presenter Assi Azar in a Tel Aviv restaurant. The meeting was reported on Mako, the online portal of Keshet TV productions.

Bennett, whose party, Habayit Hayehudi, opposes the bill to extend tax breaks to same-sex parents, agreed to meet Azar after the latter posted on Facebook that he would like to explain to the minister the importance of promoting legislation that benefits the gay community in Israel.

Azar described the meeting in a kosher restaurant in central Tel Aviv as “civilized and pleasant.”

“I attempted to explain [to Bennett] the importance of his decisions regarding the LGBT community (though not only them) and of the legislation recently proposed by members of Yesh Atid. This is an historic opportunity for equal rights and human rights,” Azar wrote on Facebook after the meeting.

According to Mako, Azar got the impression that Bennett was looking for ways of supporting legislation that benefits the gay community, without altering the Jewish nature of the country.