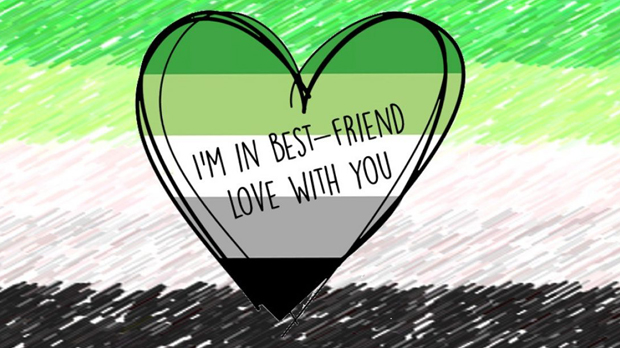 February 18-24 was international Aromantic Spectrum Awareness Week. Its purpose is to help people understand themselves better, but it also helps society understand and accept aromantic people as they are. Israeli activist Ayelet Enisman explains what does it mean being aromantic.

Many times, when people hear that I am aromantic, their responses can be measured on a scale. One the one side of the scale is the thought that it means that I don’t need love relationships of any kind, which they see in a negative way. On the other side of the scale is the notion that I am declaring myself as Voldemort. But I do love love relationship, I love kitsch and all that, and I also have a nose. So what does it mean to be aromantic?

First of all, there *are* people who don’t need such relationships or are not comfortable with expressions of love, and that’s fine. Secondly, being romantic is an orientation and it exists as a spectrum. The aromantic spectrum is characterized by a lack of romantic attraction, but there are, for example, aromantics who experience little or rare romantic attraction.

It’s important to understand the difference between sexual attraction and romantic attraction. Usually they go together, but that is not always the case. Some people are physically attracted to certain gender(s) but are romantically attracted to other gender(s). Not all aromantic are necessarily asexual, and vice versa. There is no combination of orientations that is less legitimate than the other.

In addition, aromance does not indicate the absence of love or commitment. Aromantic people can be people who love no less than others. Some will even want romantic relationships, or relationships that are similar to that. Different people experience the same things differently. In general, society tends to give romantic love a place of honor, but not platonic love. When you can see strong love between people, you tend to say that it’s romantic, even when it’s not what the people who experience it feel and even though they say it’s not true for them.

As far as I’m concerned, any act can be a platonic. I’d love to walk on the beach during sunset with a good friend, talk all night with a loved one, sail in the light of the stars with a woman I love or live together forever with a close friend. When I make gestures of love, they originate in friendship. The feelings I experience are not the same, but calling them different names, like “platonic” or “romantic,” feels very segregated to me, and this is artificial segregation for me, because to me they don’t feel different in a way that justifies different names.

I remember that at the age of 11 I asked a girlfriend what’s the difference between her boyfriend and the rest of her friends. I continued to ask this question later on, even though I experienced crashes on people and believed that in the future I would have a romantic relationship. When the future came, I realized that every moment I experience was friendship and that everything was possible with friends. Even when I believed that I would want a romantic relationship, I couldn’t understand why “you’re like a brother to me” was not a compliment or how can you start a romantic relationship with people without being friends first. I would love to live with a girlfriend or a close friend, but I am unable to distinguish between this kind of relationship and living with my sister. It’s the same feelings that I have towards my sister and other friends.

The fact that we are not “just friends” does not mean that my feelings are not 100% platonic. When I say that I am aromantic, I don’t say I’m without love. Nor do I say I don’t want close relationships. What I’m saying is that I don’t experience romantic attraction, and that’s it.