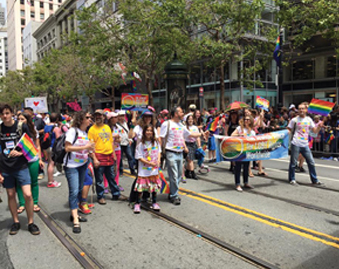 The timing of the historic ruling meant that Pride celebrations around the Bay Area were more exuberant than usual. And Jewish groups were front and center during the festivities.

Members of Congregation Sha’ar Zahav were so happy about the Supreme Court ruling establishing marriage equality in all 50 states that they just had to dance.

The historically LGBT synagogue in San Francisco posted a video of adults and children dancing outdoors to the soundtrack of Pharrell Williams’ “Happy” shortly after the June 26 ruling, which came two days before the city’s 45th annual Pride Parade.

Camp Newman, Keshet, American Jewish World Service and the JCC of San Francisco all marched in the San Francisco Pride Parade. They were joined by a contingent of at least 15 synagogues marching under the banner of the Union for Reform Judaism.

A number of local congregations held Pride Shabbat services that weekend — including Congregations Sha’ar Zahav and Emanu-El in San Francisco and Congregation Beth El in Berkeley. The JCC of San Francisco hosted a Pride happy hour and Keshet and Piedmont’s Kehilla Community Synagogue hosted a Shabbat picnic in Dolores Park before the Trans March. And for the third straight year, Congregation B’nai Emunah of San Francisco had a booth in Civic Center Plaza on Pride Sunday, this year adding Jewish trivia questions to the mix.