Youth movements’ teen boys and girls, who led the memorial service to mark seven years since the murder of Liz Trobishi and Nir Katz, remind us that the struggle for equal rights is not over. Despite the progress in the LGBT struggle, the community is still haunted by ghosts of hatred. 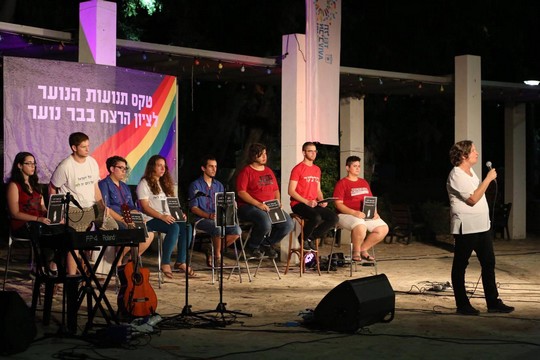 Ayala Katz, mother of Nir Z”L, was the only adult on stage at the youth movements’ memorial event for the Bar Noar victims in Tel Aviv

Seven years after that terrible night, where teenage girl Liz Trubeshi and instructor Nir Katz were murdered in the Bar Noar, a year after the Gay Pride Parade in Jerusalem where Shira Banki was murdered, and a week after the biggest Gay Pride Parade Jerusalem has ever seen, and only a handful of people came to the ceremony for the victims of the murder in Bar Noa which was organized by LGBT members of the youth movements. Seven years after the Bar Noar murder- and the killer is still on the loose.

But despite the poor and unfortunate attendance of the community, to me it’s one of the most important and most political events recently seen here. The LGBT teenage boys and girls have proved once again that they are the bravest and most political group currently in the community, and their world view, formed by the violent and homophobic reality in Israel of 2016, and probably with the help and guidance of superb and very cohesive instructors and professionals in the various youth organizations, is unapologetic, and brave enough to form a memorial event that is a political and very impressive program.

The event itself – almost in a national and official form, including the singing of the Israeli national anthem at the end – was written and edited in its entirely by the boys and girls of the youth movements, who also wore shirts of their organizations. The event included a version of “Yizkor” (‘We Shall Remember’), uniquely for LGBT people who are victims of hate crimes, along with singing, and moving texts and videos. Organizers were able to avoid inviting politicians and so, besides Ayala Katz, mother of Nir, no adult was on the stage.

The texts that were recited included an updated overview of LGBTphobic events in Israel over the last year, testimonials of teenagers that were shown as text on the screen at the side of the stage. Strong statements were expressed, that the schools are not necessarily a safe place as they should be for LGBT teens, but even home is not necessarily so, evidenced by some of the wounded from the Bar Noar massacre who were forced out of the closet that terrible night and found themselves cut off from their families.

The highlight of the ceremony was a short video in which the Bar Noar and Jerusalem pride parade murders were interwoven with other hate crimes around the world, including the massacre in Orlando, current homophobic events and the sabotaging of bills in favor of LGBT people in the Knesset. The organizers of the event introduced in the video the direct link between hate crimes, LGBTphobic statements and incitement by public officials.

All that remained at the end of the evening was to say a big thank you to the teenagers who bothered to remind us, members of the adult community, that the struggle is not yet over, and that the new generation has the courage and determination to continue to fight.