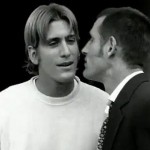 In 1995 an ad for the beer brand Guinness, that showed a couple of men in their home, was censored. Fifteen years later it was uploaded to the web, and 2 years after that it became a web sensation!

A gay couple kissing on the cheek was too much for the world of advertisement in 1995, according to the ‘Guinness’ beer company, so a commercial that was produced in America that year under the title ‘Men and Women Shouldn’t Live Together’, never went on air, as the heads of the company feared a negative reaction after British tabloids described it as controversial and wrong. Later that year, the company even denied producing the commercial. Seventeen years later, and this week the ad went viral and became a YouTube sensation.

The ad shows two different kinds of men: one is a tidy and clean, stay-at-home guy who leads the audience to believe he’s a woman at the beginning of the ad, and the other one is a messy businessman going to work in the morning. The sountrack of the ad is Tammy Wynette’s classic ‘Stand By Your Man.’

“Those men are a gay couple,” said then-creative director Tony Kay, “and with this storyline I believe we could’ve sold more beer if the ad went on air.”