In the aftermath of the hateful mass protests at our Creating Change reception on Friday night, A Wider Bridge would like to express gratitude for the many LGBTQ leaders and allies across North America and Israel for their support and leadership.

On Saturday morning, Chicago-based civil rights leader, the Reverend Jesse Jackson, invited the staff leadership of A Wider Bridge to his offices at Rainbow PUSH. Executive Director Arthur Slepian and Tyler Gregory, Director of Programs and Development, met with the Reverend for a discussion about the disturbing events on Friday night, in which protestors sought to silence A Wider Bridge, Jerusalem Open House, and the Israeli LGBTQ community at Creating Change. Arthur and Tyler also had a meaningful conversation with the Reverend about our concerns regarding the unfortunate involvement of the Chicago chapter of Black Lives Matter in the protest of our event.

A Wider Bridge’s Executive Director Arthur Slepian: “We greatly appreciated that Reverend Jackson reached out to us, and that he voiced his support for LGBTQ rights everywhere.” 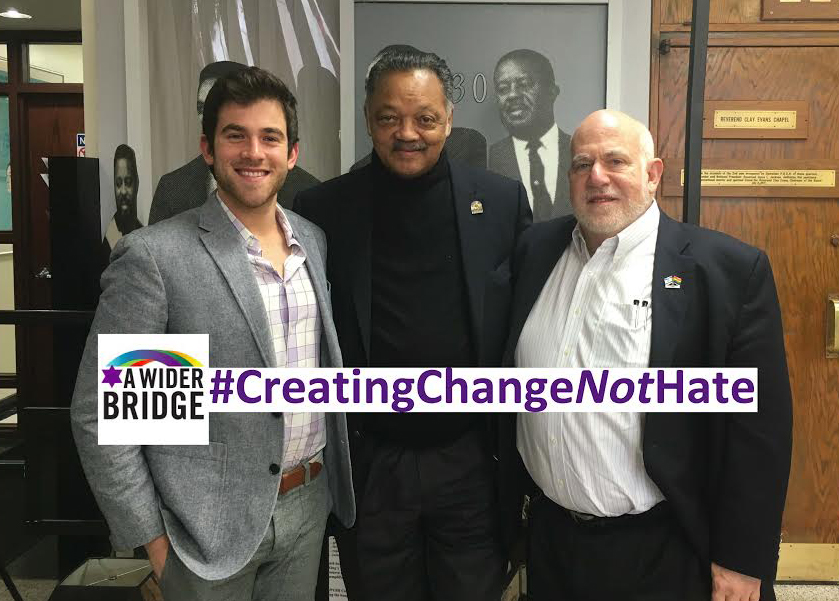 The Reverend Jesse Louis Jackson, Sr., founder and president of the Rainbow PUSH Coalition, is one of America’s foremost civil rights, religious and political figures. Over the past forty years, he has played a pivotal role in virtually every movement for empowerment, peace, civil rights, gender equality, and economic and social justice. On August 9, 2000, President Bill Clinton awarded Reverend Jackson the Presidential Medal of Freedom, the nation’s highest civilian honor.

In 2012, following President Obama’s support for gay marriage, the Reverend became outspoken about LGBT equality. “If Dr. King and our civil rights movement have taught us anything, it’s the fundamental principle that all people deserve equal protection under the law. LGBT people deserve equal rights — including marriage equality,” the Rev. said. “Discrimination against one group of people is discrimination against all of us. The State — and the Courts — should not sanction discrimination. We must be consistent in upholding human rights for all human beings.”