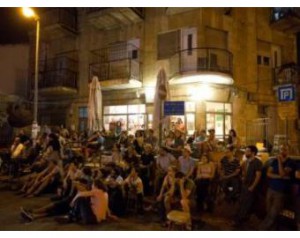 Jerusalem police arrest a man who attempted an anti-gay attack at screening of a gay documentary in a café.

Jerusalem police arrested a 58-year-old man after he hurled homophobic abuse and made violent threats against people watching a screening of a gay documentary.

The incident took place at the Hasalon Beshabazi café in the Nahlaot neighbourhood of Israel’s capital city on Monday evening (23 July), where about 40 people gathered to watch a documentary entitled From Jerusalem with Pride.

The screening of the film was organized by the Israeli LGBT rights NGO Jerusalem Open House (JOH) ahead of Jerusalem Pride which will take place this Thursday (28 July).

At first, spectators were met with homophobic abuse by a woman living next to the café, saying ‘don’t you dare screen a movie about fags here’.

A man then joined in, shouting abuse at spectators who refused to leave and continued to watch the documentary. According to Eitan Schechtman of the JOH he is the woman’s husband.

Other residents shouted further abuse such as ‘you perverts desecrate Jerusalem’.

When the man realized his abuse did not disrupt the screening he came down from his apartment, armed with a baseball bat and tried to hit members of the audience, yelling homophobic threats.

‘We will burn you, we will kill you’ and ‘there will be a murder here tonight,’ he shouted.

Neighbors and participants tried to calm him down and he returned to his flat only to throw objects from his balcony towards the spectators sitting in the café below.

After the arrest, the screening continued uninterrupted, followed by a poignant discussion on the issue of homophobia.

Mr Peretz was held overnight for a police investigation during which he admitted to have threatened the audience.

He was brought before the Jerusalem Magistrate Court on Tuesday (24 July), where it became apparent that Mr Peretz had previous convictions of ‘disrupting public order’.

JOH filed a complaint against Mr Peretz who has been released to house arrest and is now suspected of assault.

Commenting on the incident, JOH executive director Elinor Sidi told the daily Ha’aretz: ‘This incident only underlines how more than ever this coming pride march is relevant.

‘This year we mark a decade for pride and despite the change and progress Jerusalem has experienced, the incident highlights the long road ahead.

‘It is legitimate that some don’t like the LGBT community. It is not legitimate to threaten with violence.’

Jerusalem pride has previously been met with threats of violence and even the Vatican had called upon the government of Israel to ban it.