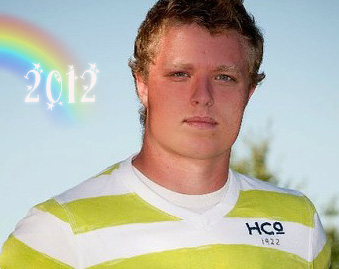 Jamie Kuntz, football [September]  This is the only negative story; Kuntz was kicked off his college football team after lying about kissing his boyfriend during a game. “If I could hear one thing, I would love to hear the school say they were wrong,” That’s how the former North Dakota State College of Science student describes his feelings on the media firestorm he’s endured since getting booted off his school’s football team after being spotted kissing his boyfriend in the press box during a game in a poignant new interview with SB Nation. Amy K. Nelson spoke not just with Kuntz, but also with his family, former teammates and school officials who stood by the decision to kick the 18-year-old off the team.

Jason Ball, Australian football [September] For Ball, publicly coming out was unnecessary. His teammates figured it out and were supportive. The homophobic language stopped. ”It was the one place I never thought I’d be able to come out. Ever,” he admitted to The Sunday Age, “It just felt like a really hostile environment. I worried I’d be bullied, maybe I’d get kicked out of the side, maybe the opposition would treat me differently or I’d get abuse [from supporters] over the fence.  I didn’t know any footballers who were gay, so I could only assume the worst, and it scared me.”

Orlando Cruz, boxing [October] This must be the most famous coming out in sports this year. “I also want kids who suffer from bullying to know that you can be whoever you want to be in life, including a professional boxer [and] that anything is possible and that who you are or whom you love should not be impediment to achieving anything in life.” In an interview with a German newspaper he explained: “Until now, I have kept my personal life and my career strictly separate from each other. No one was supposed to know that I’m gay. This game of hide-and-seek was incredibly strenuous and it took a lot of energy out of me. Now I’m hoping that I can put that energy into my training.”

Jessica Aguilar, mixed martial arts [May] As mixed martial arts fighter Jessica Aguilar gears up to fight the top-seeded female strawweight in the world, she told Sports Illustrated’s Loretta Hunt that she has learned to be more open about her bisexuality. She’s … reached some comfort in sharing her bisexual orientation, which she kept hidden in high school to avoid being singled out. “I don’t put it in any titles,” said Aguilar, “but I’d say when I’ve found the right person — whether it’s a man or a woman — I’d be happy.”

Kevin McClatchy, former owner of the Pittsburgh Pirates [September] The owner and CEO of the Pittsburgh Pirates from 1996 to 2007, has acknowledged he is gay to The New York Times, saying frequent homophobic slurs he heard in baseball circles had convinced him to keep his sexual orientation a secret. “An amazing amount of support came forward after [the story] hit. I’m hearing from different folks from all walks of life. I’m hearing from a lot of my former baseball colleagues, which has been great, hearing from people I don’t even know, giving me positive shout-outs. It’s been great. It’s one of those things I had feared doing for 25 years, and I finally got to that moment and I felt like I was jumping off a cliff. But it’s been a positive experience.”

Thomas “Bozzy” Boswell, rugby [August] “I hated myself, I hated myself for what I was,” Thomas “Bozzy” Boswell says at the beginning of his wonderfully moving 12-minute YouTube video (see below) detailing his experience as a closeted gay teenager and his triumphant coming out story. As the captain of his rugby team in Quaker Yards, Wales, Boswell was trying to reconcile being a macho jock with being gay and finally decided to tell the world who is he.”I would really like to thank my close friends and especially my rugby team as I honestly thought I would be to ashamed to ever carry on playing rugby. But the boys have showed and proved to me that my thought of them were wrong.”

Stephen Bickford, soccer [August]  Bickford wrote a long piece for the blog Gay4Soccer about his experiences as a top-level athlete in the closet “What would my coach think? Would he not play me because I’m gay? Would I be cut from the team? These thoughts were almost unbearable. It’s a weight on an athlete’s shoulders that nobody should have to experience, but it happens every day to thousands of closeted athletes playing team sports all over the world.”

Wade Davis, football [June] “I think subconsciously, I understood that being gay — the way I was raised — was wrong,” Davis told Amy K. Nelson of SB Nation. “And there was no way that my family, at least, in my mind, would accept me. And also that my football family would accept me. Just because of the perception of being gay meant that you were less masculine.” Later on Davis told OutSports.com“You just want to be one of the guys, and you don’t want to lose that sense of family.”

Seimone Augustus, basketball [May] Five years after their first date at a local Six Flags theme park, Augustus is getting married—to a woman. She says her future nuptials with LaTaya Varner encouraged her to come out publicly as a lesbian, and the two are planning a summer wedding. Not this summer, though. The 28-year-old is concentrating on finishing her season in the Russian women’s basketball league, a two-peat of the WNBA league title, and bringing home the gold this summer from the London Olympics.

Megan Rapinoe, soccer [July]  U.S. Olympic soccer player Megan Rapinoe is speaking frankly about her sexuality in a new interview with Out, telling the magazine that she is a lesbian and in a committed relationship with a woman. “People probably guessed that I was gay because I’m pretty transparent in the way that I live my life. I think it’s pretty cool, the opportunity that I have, especially in sports, because there’s really not that many out athletes. I think it’s important to be out. It’s important to stand up and be counted and be proud of who you are. I’m happy if I can help anyone else in their struggle. I’d like to make a positive impact on people.”

Anja Pärson, skiing [June]  Swedish skiing legend Anja Pärson confirmed to radio listeners in June that she has a girlfriend and that the couple are expecting a baby. Anja and Filippa met seven years ago … Their friendship became ever deeper with time. All of a sudden one day Anja has a feeling she had not known before. She had fallen in love with her new friend, and Filippa had fallen in love with her.

Josh Dixon, gymnastics [May] The only homophobia he has encountered has been from within himself. He acknowledges he once felt internal pressure about being a gay man in what some label the “gay sport” of gymnastics. He didn’t want to fall into a stereotype. But he’s come to embrace it, and he says his sexual orientation now makes him stand out more at the elite level.

Rick Welts, basketball executive [May]  Welts announced he’s gay in a video interview with Time magazine. “No one in a position like mine had ever taken this step. I couldn’t watch anybody go through it and say, ‘You know, that can work out okay.’ So maybe I’m just not going to risk it. And I had great family, great friends that were supportive. But I just put a barrier around that part of my life in my work environment. ” In many work environments, this would qualify as a so-what moment. But until now, Mr. Welts, 58, who has spent 40 years in sports, rising from ball boy to N.B.A. executive to team president, had not felt comfortable enough in his chosen field to be open about his sexuality.

Bryan Fautley, volleyball [March]  As Fautley told Coyle, he quit the team in April 2010 out of frustration over the prevalent atmosphere of casually homophobic comments, but decided to return that fall following conversations with his teammates and head coach Brenda Willis. When he came back, there was a dramatic shift in both the program and his own interactions with the others. “When someone says a homophobic slur and you’re in the closet, you have no grounds to say anything, so you take it. Not only do you take it, but you remember it in your head, and it compounds.”

Scott Heggart, hockey [March] Heggart knew he was gay from the 6th grade on, but he was an athlete even then, and suffocated by the incessant homophobic machismo of the locker room. His twin identities as a gay male and athlete seemed irreconcilable. In a series of poignant [YouTube] interviews, he asks the members of his family, one by one, whether they thought he was gay, and what their reaction is now that they know. He asks his dad to offer advice to other fathers struggling to support a gay child.

Brian Healey, tennis [January] In a special post on OutSports, Brian revealed his personal story:  “Telling my parents was difficult, but for the best, and I can happily say my relationship with them has never been stronger. To my surprise, my mother was surprised when I told her. All the “girl friends” I’d had throughout high school, it seems, were mistaken for girlfriends.”

Derick White, volleyball [April]  “I remained in the closet for my entire coaching career because of one simple factor – fear. I wish I could have had the courage to speak out while I was still coaching at the college level. Comments made by some administrators and parents made me believe that it would be in the best interest of the programs for me to remain silent. I now realize that was ridiculous. I was contributing to the whole situation I should have been fighting. Yes, I was a gay collegiate head coach. Did that have anything to do with my skills or abilities as a coach? Not at all.”