At the age of 52, with a husband and two grown children, Naama suddenly fell in love with a woman. Today she’s married to her, and has shared her story with Israeli website “Motke”. “With a woman you can talk about everything,” she says. 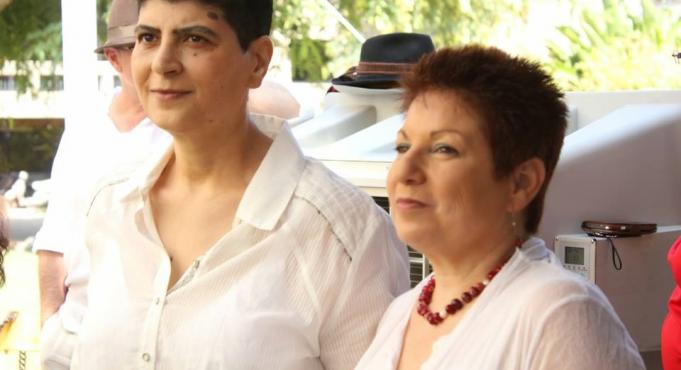 Na’ama, now 57, could never imagine this would happen to her. At the age of 52 she fell in love with a woman, and not only fell in love – but also married her, surrounded by her friends and family.

Na’ama lived a life we ​​like to call normative: born in a Kibbutz ( “My parents are Holocaust survivors and I am a survivor of a Kibbutz”). She met her husband when she worked in a production company in Tel Aviv, and they lived for several years in northern Israel and several years in England. They had two sons, and when she was 40, they divorced. After her divorce Naama continued to date men, and even moved in with a boyfriend. Then it happened to her for the first time. “I fell in love with a woman who worked with me,” she recalls.

“We were both in relationships with men, and were so frightened by what was happening that our relationship never became romantic, but the emotion was very strong and very clear. I think there was a point in time where I realized that women intrigue me.”

Na’ama continued to live with her boyfriend at that time, and even after they broke up she continued to date men. “In my head, curiosity poked me continuously. I didn’t know how to meet women, what to do. I knew no one to guide me,” she says. “I went to a women’s meeting in Haifa, but I got really scared because everyone knew exactly what they wanted. I told them I was curious, but never went back there. Then I signed up on a dating site for women. I started to talk with someone there, but I didn’t dare to meet her. We continued to correspond for two years, and each time we set up a meeting I canceled at the last moment”.

Her courage to meet with the women from the dating site finally came when her sons grew up and left home. “I moved to Nahariya, where I was completely anonymous,” Na’ama says. “I gained courage and I finally met one of them. We dated for a few weeks and it didn’t work out, but she introduced me to ‘Beshela,’ a group for mature LGBT women. Two weeks later, I met my partner Rinat there. We’ve been together for four years, and three years ago we got married.”

When did you tell your family?

“At the very beginning. My youngest son, 23, told me: ‘Mom, I’m so happy for you.’ My eldest son was then 28 and on a trip to the Far East. I told him over a Skype call that I was in a relationship with a woman. His response was: “Mom, if you’re happy then I’m happy”. My mother who was then 90 years old, said ‘OK’, and when I told her we were getting married she said, in her Hungarian accent, ‘Give me a moment to recover.’ She loved Rinat very much. ”

So basically your time was not spent in the closet?

“Not even for a second. I’m a very open person. Even my sons’ father was at my wedding.”

Why do you think it happened to you at this age?

“I paid my dues to society. I got married, I had kids, and I feel that I owe nothing to anyone. Women’s companionships are very different from those with men. At our age, a relationship with a woman meets a completely different need. We don’t need a man to provide for us, we need a soul that really gets us, understands us and feels us. I can’t explain it. The children are grown and my hormones wanted something else. Men tend to be more closed emotionally and I’m an open person. At that point I felt that if the person next to me could not talk about his feelings, there was no point being with him. I couldn’t endure the emotional barriers any more.”

Naama has advice for women who feel like she does but are scared to go with their heart. “Don’t be afraid,” she says. Leave the ‘what will they say’ aside. We have a joke in the organization ‘Beshela,’: ‘I’m not lesbian, I just fell in love with a woman.'”