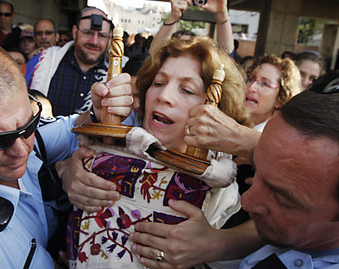 Last night Anat Hoffman was arrested at the Western Wall. This occurred during a prayer service in the woman’s section with 250 other participants, including members of Women of the Wall and Hadassah.  Anat was detained and held overnight in police custody for disturbing the peace. She was arrested for saying the Shema, Judaism’s central declaration of faith, out loud at the Western Wall.

“Anat was put through a terrible ordeal,” writes Noa Sattath, Director of Israel Religious Action Center in a news alert email that was released today. “The experience was both frightening and humiliating, simply for wanting to pray as a Jew at the Kotel. We are all so relieved that Anat is now back home.”

Hoffman said police strip-searched her and detained her overnight. She says she was released Wednesday after agreeing to stay away from the site for a month. Sattath says, that the IRAC is now “more determined than ever to achieve equality for women, everywhere in Israel, including the Kotel.”

Women and people who are concerned about gender equality can sign and share the IRAC petition, which calls on the Israeli government to end the ultra-Orthodox monopoly over the Western Wall.