Yiscah Smith is a spiritual teacher and a Jewish education teacher from Jerusalem who was brought by A Wider Bridge for a series of talks in America back in August. She read from her book ” Forty Years in the Wilderness: My Journey to Authentic Living” for the first time in Israel last week in Tel Aviv. 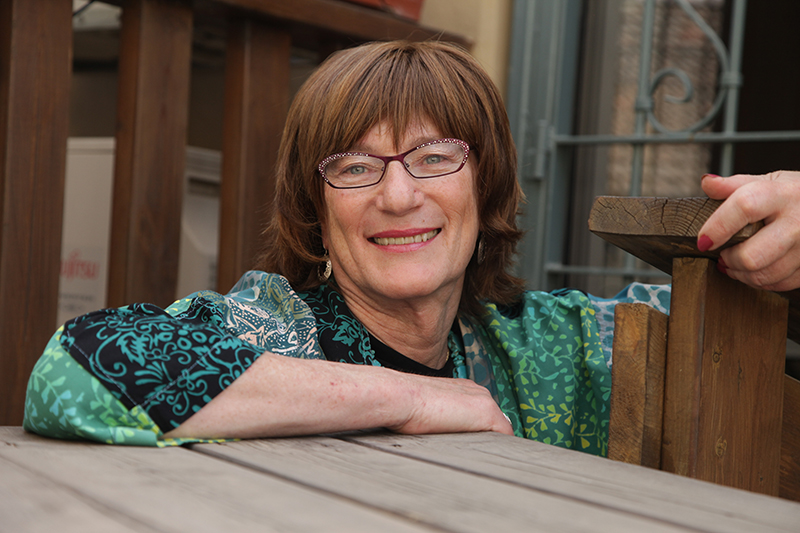 The reading took place with the combined help of the organization “Maavarim” and the project “Third in the Center.” Yiscah read excerpts from her book, describing the journey she’s been through since growing up as a teenage boy in an Orthodox yeshiva, until the day she returned to Israel as a woman.

“The story I wanted to tell is the story of a person dealing with his own truth,” explains Yiscah, “from the woman who he always wanted to be, and her return to faith with integrity and authenticity.”

How does it feel to tell your story to religious people?
“Very comfortable. I’m having a lot of readings in front of religious Olim, I live my life and don’t expect everyone to agree with me or accept me, as I did for many years in the past. Now, when it’s no longer important to me and I’m not under pressure, I get it. I feel that now, when I reconnected with myself, I can connect with everyone and between everyone. Because I’m religious but don’t live in an ultra-Orthodox closed world, I’m open to everyone “.

What is their reaction?
“They accept me very well and this is really a surprise for me. I think it’s because I didn’t ask them to accept me, just to sit down and listen. Because I learned at the Yeshiva and have a lot of experience and knowledge, it was easy for me to talk to religious people in a language they would understand. They received me very nicely and told me they didn’t expect it to be that way. ”

Yiscah currently teaches in a traditional Conservative Yeshiva in Jerusalem. Most of the boys and girls in her class have read her book and are familiar with her extraordinary story, and according to her, some of the students who read the book even become empowered from it.

Why do you think your book manages to appeal to everyone?
“I think that everyone has challenges that prevent them from being 100 percent of what they really are. It may be due to fear, shame, pressure or expectations from the family and the community. Just as I waited until the age of 50 because of stress in my life, until I finally arrived at a place where I couldn’t keep living a lie anymore. Everyone finds himself in my story. Even readers who are not religious or not LGBT wrote me how my book helps them, even though they don’t go through the same journey that I have. The story here is the personal journey of each of us, and it can strengthen and empower everyone who deals with obstacles that seem impossible.”

Do you know other men and women who are dealing with the same situation you were in?
“I know there are a few transgender people who are observant, keep kosher and want to maintain a stronger tradition, but have not yet reached a place of peace with the transition, but I hope they are on their way”.

Yiscah was born a boy to an Orthodox family and was raised in New York. At age 20 he got married, moved to Israel and raised a family. At 40, after 20 years of marriage and six children, Yiscah left religion and left his home.

“I left the Torah and my wife in Jerusalem and moved to Tel Aviv,” she recalls. “It was important for me to stay in the country in order to be near the kids, but it didn’t not work, so in the end I went back to the United States”.

When she returned to the United States she began the sex change process, which took almost ten years.
“The ten years in the United States were very difficult. I was cut off from family and friends and I had to go through the process by myself,” she recalls. “At that time I also moved away from religion and the way of life that I knew before.”

At the end of the transition process Yiscah felt she was reborn, and the renewed connection with herself brought her back into religion. “On my 50th birthday, I felt a real answer for the first time, but this time it is authentic. I felt that the transition I made wasn’t just a sex change, but a change in lot of other things in me. I started to do repairs in myself and returned to the Torah openly”.

“My journey started when I was 20, and it ends in the book at age 60,” explains Yiscah, “forty years in the wilderness, just like the Israelites. I didn’t plan it to be this long, and the truth is that I hadn’t noticed it, until I was for the first time at the Western Wall as a woman. Suddenly I understood that exactly forty years have passed since I was at the Wall for the first time as a boy of 20 and I realized that, like the Israelites, even my journey from slavery to freedom lasted forty years. ”

Do you feel closer to religion than in the past?
“I love the Torah and have a strong relation to God. Unlike in the past when he was the in sky and had to solve my problems, now I feel like there is a real relationship between us. ”

How do you define yourself today?
“I teach at a Conservative Yeshiva, but try to keep the commandments in such a way that people think I’m Orthodox. When people ask me, ‘What are you?’ I prefer to answer ‘I’m Jewish, and that’s enough. “