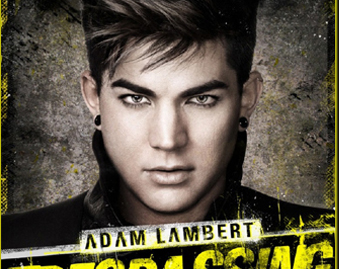 Adam Lambert‘s new single Trespassing which was officially released to radio this week, and beyond the funky-rock-fierceness that is so typical of Lambert’s singing, it’s pretty clear that the lyrics of the song, co-written by him, are implying  the young rockstar’s openly gay life style. “I came across this sign Sayin’ ‘Who are you and where are you from?’,” the lyrics say, and then continue, “I don’t need no sympathy/ I won’t cry and whine/ Life’s my light and liberty/ And I shine when I wanna shine…”

Currently on promotional tour in Australia and New Zealand, gay-advocate Lambert was a guest on a Kiwi morning show, talked about legalizing gay marriage in America. “I want the right to get married,” he said, “Who knows what my future holds. I’m not planning to get married anytime soon but I feel like I myself  and other people should have the right.” Watch the full interview:

Since the release of the song Lambert has been encouraging fans to request the song on their local radio stations, in order to expose it as much as possible and turn it into a hit. Adam tweeted to his more than 1.7 million followers on the day of release, “Tell your radio stations you want to hear #Trespassing! Today it’s official!”

And if that won’t increase exposure, Lambert’s cameo in the teen hit TV show ‘Pretty Little Liars’ probably will. A sneak peek at the Halloween episode of the show has just been released where Adam talks to the popular character Aria, wearing vampire fangs, of course.

For those of you who would like to shake your booty to an Adam Lambert song, an EP of great remixes of Trespassing is out on Tuesday (October 16), but you can get a taste of it right here.

A Wider Bridge Connection: Adam Lambert’s mother is Jewish and he went to Mount Carmel school when he was a kid. The Times identified Lambert as the first openly gay mainstream pop artist to launch a career on a major label in the U.S.