A Wider Bridge welcomes Peter Fox as our 2018 New York Fall Fellow! Peter is a passionate advocate for LGBTQ rights and pro-Israel advocacy, with a strong social media following and a history of editorial writing for Jewish and Israeli publications. 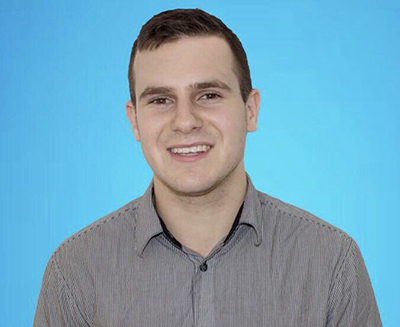 Peter Fox is a student at Miami Ad School where he studies copywriting and advertising. Outside of the classroom, Peter is dedicated to community building and Israel advocacy. In March of 2018, he represented A Wider Bridge at the DigiTell media conference in Jerusalem where he spoke on a panel about bridging the LGBTQ and Pro-Israel communities.

Peter has also taken his advocacy online where he has a robust Twitter following and has written op-eds on Jewish world politics for the Forward, Times of Israel, and Ynet News. Earlier this year he was interviewed by the Jerusalem Post about his role in advocating for Israel within the LGBTQ community.

Peter will be working in A Wider Bridge’s New York Office with Quentin Hill, Tye Gregory, and Sheridan Bahar to build LGBTQ support for Israel and LGBTQ Israelis.

“As an AWB Fellow, I hope to strengthen my ties with the LGBTQ and pro Israel community in New York and abroad,” says Peter.  “If there’s one thing I’ve learned from studying advertising, it’s that conveying a brand message hinges on a strong insight of the target audience. I believe strongly in the message that A Wider Bridge stands for and am excited to apply my skills to strengthen the work of advancing equality in Israel and equality for Israel.”

“Peter is a gifted communicator and brings great energy to the team. We are looking forward to working with him,” said AWB Executive Director Tye Gregory.

Peter’s journey into Israel engagement came in the winter of 2017.  He began reading about Israel, saying that “the more I read the more I wanted to learn more, which led me to booking a flight a few months later and reconnecting with my Israeli family who I hadn’t seen in 14 years — and some of whom I had never met.”

When in Israel, his favorite Hummus place is Abu Hassan’s in Jaffa. “They get the consistency down perfectly,” he remarks.

Peter’s trips to Israel and becoming involved in the NY LGBTQ Jewish community reinvigorated his Jewish identity and a Zionism that he didn’t have previously.

Welcome, Peter! We are glad to have you onboard!