On Sunday, Edie Windsor will take part in honoring Roberta Kaplan at A Wider Brunch with the AWB 2016 National Leadership Award. This week we met with her to record an interview for the event. “I get stopped on the street, still, all the time,” she said. 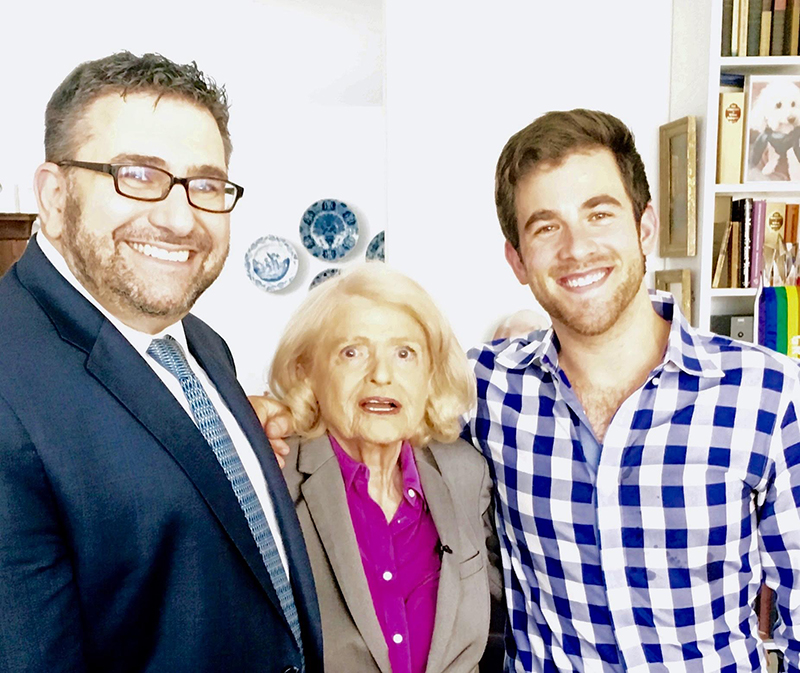 Edie made history as the plaintiff in the Supreme Court Case, United States v. Windsor, which overturned the Defense of Marriage Act – the discriminatory law that defined marriage as between a man and a woman.

Edie shared her story working with A Wider Brunch Honoree Roberta Kaplan, her close friend and the lead attorney in the Supreme Court case. Edie Edie also expressed her dismay with the events that A Wider Bridge faced last January at the Creating Change Conference in Chicago, in which an angry protest shut down our reception featuring Jerusalem Open House. Edie was one of more than eighty LGBT leaders who came to A Wider Bridge’s defense after the protest, signing an open letter penned by Roberta Kaplan which condemned the anti-semitism and anti-Israel censorship that had taken place at the largest annual gathering of LGBT activists in America.

“I get stopped on the street, still, all the time, it’s three years now,” Edie said, “by kids who start to cry and who say ‘please, wait, I’ll pull myself together, I need to talk to you,’ and they tell me about how they were never able to go back home to their country and couldn’t see their mother who was sick, until our case, and I’m their hero. I get it from young people, from old people, all the time.”

The full interview with Edie will premiere during A Wider Brunch, this Sunday at 11:30. Watch it live on awiderbridge.org