Rabbi John Rosove, Senior Rabbi at Temple Israel of Hollywood, shares his heartfelt support of A Wider Bridge and the importance of connecting the LGBT communities of North America and Israel. 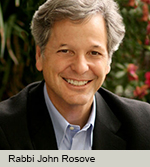 “At Temple Israel of Hollywood, a true Reform congregation, I am blessed to say that a gay, pregnant, female rabbi is no more out of place on the bima than any of my colleagues!” So declared my colleague, Rabbi Jocee Hudson, on the second day of Rosh Hashanah in a sermon in which she described both the changes that Reform Judaism has undergone that have opened the door to a wider diversity of Jews, and the challenges facing Jewish life anew in the 21st century.

Rabbi Hudson noted that going forward the American Jewish community will need to open its doors even wider and be even more inclusive than we have ever been before to welcome Jews and their families, and to continue to rethink how we pray, how we learn and think about Torah, about the meaning of “community”, how we engage with the people and state of Israel, and about how we recommit ourselves to social justice work here and abroad.

Rabbi Hudson was quick to say that despite the need for ongoing change, such “revolutionary challenges” are, truth to tell, nothing really new in Jewish history and tradition. That being said, our community has, indeed, changed dramatically in the last fifty years of American Jewish history.

One of the most significant changes is the leadership role women have taken as rabbis, cantors, scholars, thinkers, and communal leaders. A second significant change involves the ever-emerging presence of LGBT Jews and Jewish leaders in our congregations thus helping us redefine the meaning of “family” in contemporary Jewish life.

Before Rosh Hashanah, I had the privilege to meet with Tyler (Tye) Gregory, a member of the national staff of “A Wider Bridge,” a relatively new pro-Israel organization that builds bridges between LGBT Israelis and LGBT North American Jews. Arthur Slepian, the organization’s founder has written:

“I am a gay man, an American, and a Jew. I am passionate about Israel, devoted to its well-being, and I want to see a resolution to the conflict between Israelis and Palestinians that will enable both to live in peace and security. My love for Israel and my commitment to LGBT equality led me to create ‘A Wider Bridge,’ an organization dedicated to strengthening the bonds between the gay, lesbian, bisexual, and transgender communities in Israel and America. I believe LGBT Jews have been a transformative force for good in the Jewish world and that LGBT Israelis have been and will continue to be a vital force in creating a stronger and better Israel.”