A Wider Bridge is deeply troubled by the incident tonight in Zion Square, in which members of The Meeting Place were harassed, assaulted, and intimidated by a group of homophobic extremists. The aggressors attempted to light a rainbow flag on fire, and destroyed property of The Meeting Place before becoming physical with several LGBTQ activists who were participating in dialogue circles that happen every week in Zion Square. 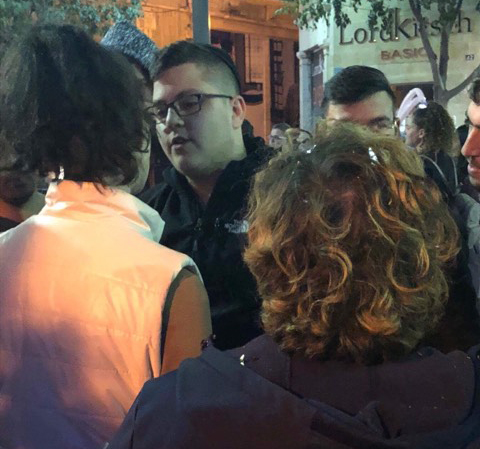 A photo of one of the agitators (shaved side of head, glasses) who was threatening people with physical violence at The Meeting Place tonight.

The Meeting Place promotes an inclusive and safe environment for the LGBTQ community in Jerusalem through dialogue and “radical empathy.” A Wider Bridge is proud to financially support the important work of The Meeting Place. We in the strongest terms condemn violence and efforts to limit the freedom of speech and expression. We are particularly troubled that many of those involved in aggressive actions tonight toward The Meeting Place are youth. It is crucial for Israel’s long term survival to create an open and inclusive environment that guarantees safety for ALL Israelis. We call on Jerusalem law enforcement to bring the perpetrators to justice, and call on the Jerusalem City Council to take measurable steps to protect and promote Jerusalem’s LGBTQ community.

“A few minutes after I got there [Zion Square] a gang of young teenagers started yelling slurs at us. Their provocations kept escalating and at one point, one of them tried setting fire to the rainbow flag that Sarah usually carries. As this was unfolding I took out my phone and started a live broadcast of this because I wanted the world to see what I was seeing.

Suddenly I felt my phone go flying to the ground and I turn to see a young man filled with so much hatred and anger in his eyes saying to me “don’t you dare fucking record me.” I got my phone and continued recording because it clearly wasn’t ending despite multiple calls to the police. This individual shoved two of my friends and then got in my face and threatened to assault me too.

I hope the Jerusalem police will hold the attackers accountable to the fullest extent possible under the law. There is no excuse for this kind of behavior.”