A Wider Bridge, the North American LGBTQ organization supporting Israel and LGBTQ Israelis, is proud to sponsor the upcoming Israel visit of Evan Wolfson, founder and president of Freedom to Marry, the campaign that led the way to winning marriage in the United States. 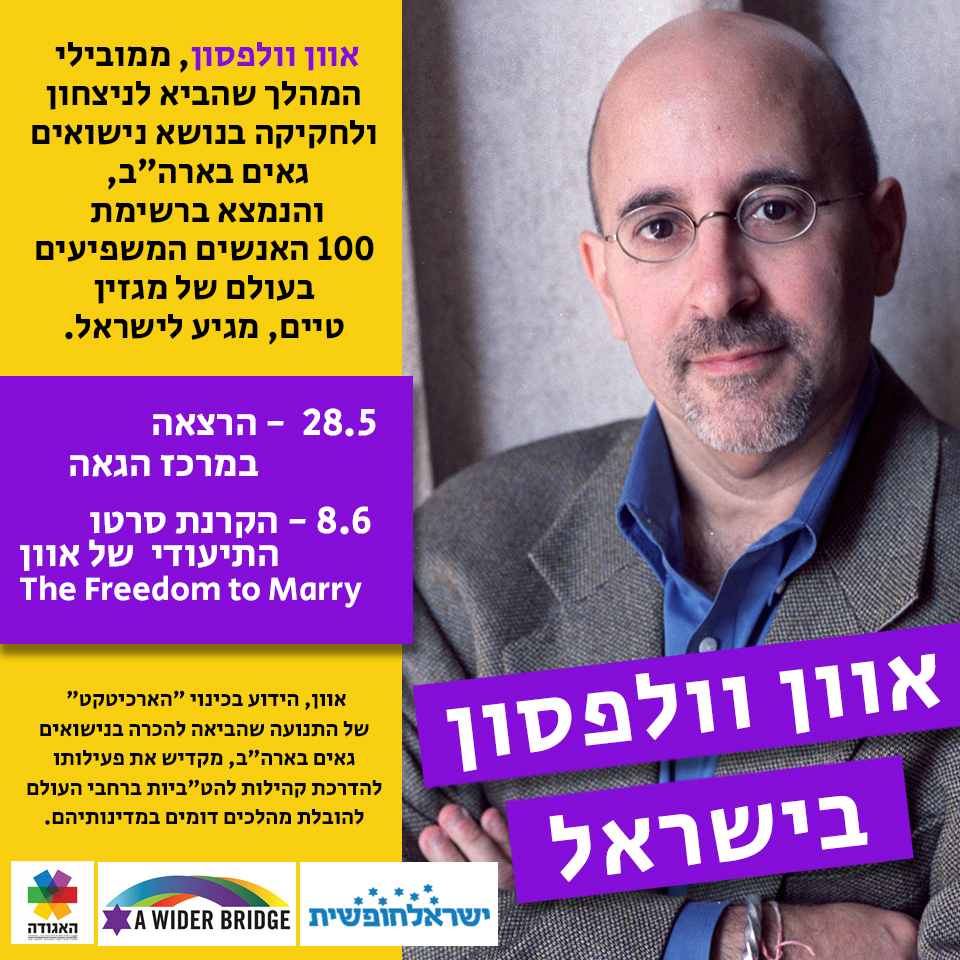 Since winding down Freedom to Marry following the success of the strategy and victory in the Supreme Court, Evan has dedicated most of his time to responding to requests for advice and assistance from other movements, causes, and countries eager to adapt the lessons and share inspiration from the successful Freedom to Marry campaign. A good part of that has involved working with advocates in several countries moving toward the freedom to marry – including Taiwan, Japan, Czech Republic, and Chile.

Evan Wolfson: “I am thrilled to once again return to Israel and have the opportunity to meet with organizations and advocates working to establish civil marriage for both gay and non-gay couples, ending an anomaly and injustice unworthy of a democracy such as Israel.  Israel has a strong record of inclusion and respect for LGBT people and couples. It is time that we, and our non-gay brothers and sisters, also have the freedom to marry in this beautiful country.”

Current Israeli law designates marriage as strictly a religious institution rather than a civil institution, preventing more than a million Israelis from marrying: LGBTQ couples, non-Orthodox Jewish couples, agnostic and non-religious couples, interfaith couples, Russian immigrant couples, and others. The denial of civil marriage is a cruel anomaly in a democratic state.

In coordination with Israeli co-sponsors The Aguda (Israel LGBTQ Task Force) and Israel Hofsheet (Israel civil rights organization advancing religious pluralism), A Wider Bridge will connect Evan Wolfson with Israeli LGBTQ and civil marriage leaders, bringing his decades of experience leading the fight for US marriage equality to the marriage conversation in Israel.  Through his visit, we seek to move the needle in the fight for civil marriage through public appearances and community consultation meetings, where Evan will share best practices from the US, raise the profile for the cause of civil marriage, and exchange ideas on strategy with Israeli leaders.

Additionally, we are proud to sponsor the Israel premiere of Eddie Rosenstein’s acclaimed new documentary, “The Freedom To Marry.” The documentary has been screened across the US and in several countries around the world. A Wider Bridge and our partners have reserved a primetime slot in the TLVfest – Israel’s main LGBTQ film festival – for a public showing. A Wider Bridge and our partners will invite leaders from the LGBTQ and civil marriage communities and journalists to the screening, which will include a talkback with Evan to answer questions about his experiences and elements of success applicable to the current conversation around same-sex couples and civil marriage in Israel.

Evan Wolfson was founder and president of Freedom to Marry, the campaign that won marriage in the United States, and is widely considered the architect of the movement that led to nationwide victory in 2015. In 1983, Wolfson wrote his Harvard Law School thesis on gay people and the freedom to marry. During the 1990’s he served as co-counsel in the historic Hawaii marriage case that launched the ongoing global movement for the freedom to marry, and has participated in numerous gay rights and HIV/AIDS cases.

Wolfson earned a B.A. in history from Yale College in 1978; served as a Peace Corps volunteer in a village in Togo, West Africa; and wrote the book, Why Marriage Matters: America, Equality, and Gay People’s Right to Marry, published by Simon & Schuster in July 2004. Citing his national leadership on marriage and his appearance before the U.S. Supreme Court in Boy Scouts of America v. James Dale, the National Law Journal in 2000 named Wolfson one of “the 100 most influential lawyers in America.” Newsweek/The Daily Beast dubbed Wolfson “the godfather of gay marriage” and Time Magazine named him one of “the 100 most influential people in the world.” In 2012, Wolfson received the Barnard Medal of Distinction alongside President Barack Obama.

Having achieved in 2015 the goal he had pursued for 32 years, Wolfson now devotes his time to advising and assisting diverse movements and causes in the U.S. and around the world eager to adapt the model and apply the lessons that made the Freedom to Marry campaign so successful. Based in New York City, Wolfson has been named a Distinguished Visitor from Practice at Georgetown Law Center, where he teaches law and social change, and Senior Counsel at Dentons, the world’s largest law firm, with 125+ offices in 50+ countries.