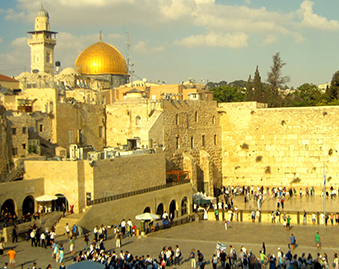 The city of Jerusalem is sacred and of religious significance to half the people on earth. The area has been fought over, conquered, destroyed and rebuilt by various civilizations for over 5,000 years. A fascinating trip to Jerusalem and its people is the subject of an IMAX film opening March 10, 2015, at the California Science Center in Los Angeles.

Jerusalem 3D is a giant IMAX cinematic journey that immerses audiences into the Holy Land. Viewers travel along soaring high above Jerusalem and deep into the Old City. Along the way, moviegoers learn more about the history and iconic religious sites found closely packed into these ancient acres, including the Dome of the Rock, to the Western Wall and the Church of the Holy Sepulchre. As one of the producers, Taran Davies, proudly stated, “This IMAX film print in 3D is as high a quality vision of Jerusalem you will ever see.”

to rarely seen, much less filmed, areas is one of the unique aspects of and gifts offered by the film, which was five years in the making. The crews were granted access to film a low altitude area of the ancient Jerusalem that had not been granted in years, according to co-producer George Duffield.