The two envelopes, one for each twin brother, arrived in the mailbox on the same day in March of last year. The larger parcel, for Aiden Dvash-Banks, contained a new U.S. passport and a letter congratulating the boy on his American citizenship. A smaller, flimsier envelope came for Ethan Dvash-Banks. Inside, a letter stated that his citizenship application had been denied. 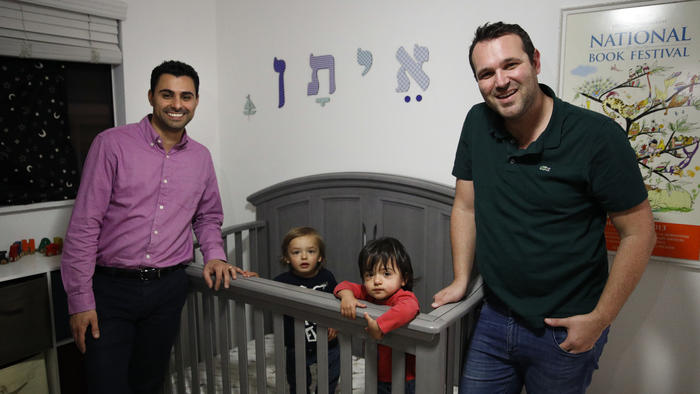 The boys were carried in the same womb, born 16 months ago in Canada, minutes apart. But now, only one of them is in the U.S. legally.

The disparity is at the crux of a lawsuit filed this week against the State Department in which the twins’ parents, a married binational gay couple in Brentwood, allege that the government’s policy of granting birthright citizenship to children born abroad based on blood relation discriminates against LGBTQ couples.

Aiden and Ethan’s parents, Andrew and Elad Dvash-Banks, are a gay couple that met in 2008 at a holiday party at Tel Aviv University in Israel, where Andrew was working toward a master’s degree in Middle Eastern studies.

They fell in love and, two years later, were married. The pair intended to settle in California, where Andrew Dvash-Banks has four siblings, along with 14 nieces and nephews. But at the time, same-sex marriages were not allowed in California because of Proposition 8 and not recognized by the federal government.

That meant Elad Dvash-Banks couldn’t obtain lawful permanent residency in the U.S. through his marriage. So his partner had a choice: He could either start his marriage away from his family, or away from his husband.

“Obviously I chose to live with the man I fell in love with,” Andrew Dvash-Banks said. The pair settled in Canada, where Andrew has dual citizenship.

The couple were elated in 2013, when the U.S. Supreme Court struck down part of a federal law that denied benefits to legally married gay couples. Elad applied for a green card soon after.

A few months after the twins were born, the couple gleefully visited the U.S. Consulate in Toronto to get their sons U.S. passports. They carried their marriage certificate, matching birth certificates, a check, some diapers and their two newborns.

After hours of waiting, an official called them to the window. There, they were asked a series of detailed questions about the boys’ conception. They felt humiliated, but offered answers.

The official said Andrew Dvash-Banks would have to undergo a DNA test to prove a biological link to each twin. Without that, neither child would qualify.

A few months after Ethan’s application was denied, the family arrived in June at LAX in June. Andrew and Aiden carried their U.S. passports, while Elad had his Israeli passport and green card. Ethan passed through customs with a Canadian passport and a six-month tourist visa.

In December, the family canceled a trip to Israel to visit the twins’ great-grandparents. Ethan’s tourist visa had expired, and leaving the country posed too much of a risk.

The day they arrived in Los Angeles, the couple swore they would fight until Ethan obtained birthright citizenship.