In a post that went viral on Israeli social media, fourth grade teacher Brahmi Michaeli tells about his experience coming out to his students. Encountering initial reactions of fear, Brahmi managed to change some views on homosexuality. “I call upon all the LGBTQ educators among us to be courageous and join me, to come out to the students, to create a sincere, sensitive and teaching discourse,” he writes. 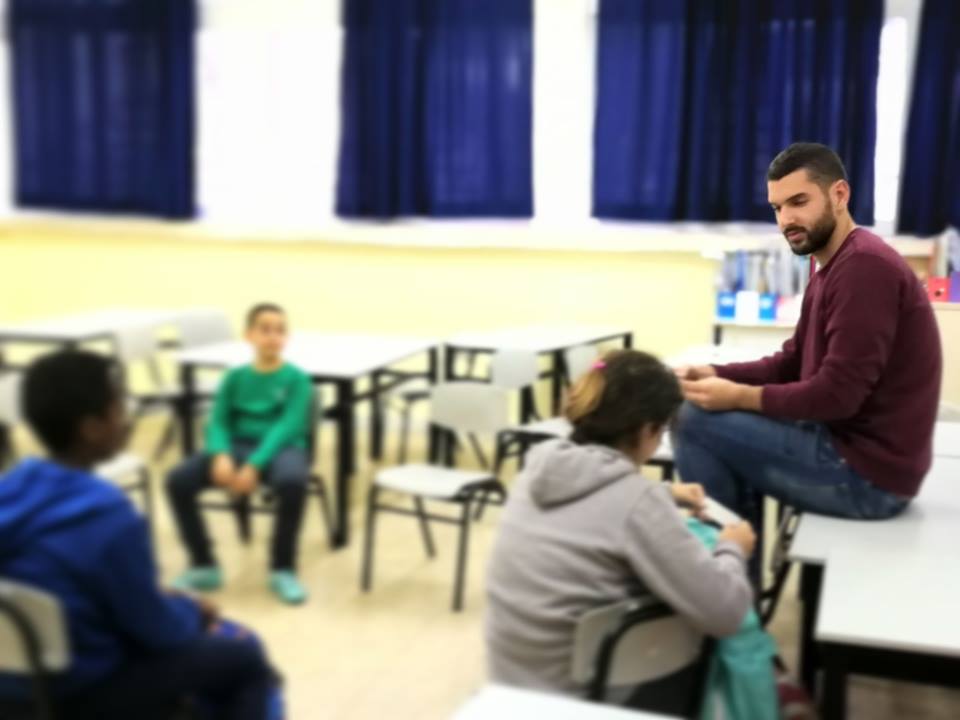 Today I came out to my students, fourth and fifth graders, as part of the language classes I teach in a school in Jaffa. When I told them I was gay and before I could explain to them what it even meant, their first reaction was panic, disgust, and fear, as if my very existence in class was hurting them. Immediately two boys got up and walked away from me. I wasn’t hurt, I shouldn’t get hurt and take it personally, because it’s children that we are talking about, and that was precisely why I was there, to change their worldview, and if I get angry or hurt, I can’t achieve my goal.

I asked them why they were walking away, so one of them said that he refused to have a gay teacher and that it was disgusting and that his parents would be angry and that he wanted to leave the classroom and not come to classes anymore. In addition, he said that in his opinion, I had no right to educate because I do not and would never have children, so I don’t understand children’s education. I explained to him that the other counselors have no children at the moment as well, and the fact that I’m gay does not mean I’m any different from them. Then I explained to the children what that word meant. I told them that it only means that I like men, and that they have no reason to be disgusted or be afraid of me. And that it’s not contagious. I told them that I had other friends like me, some of whom even have families and children. They asked me if I’m gay now, if it happens when I’m standing in front of them, if I’ve ever tried to change it. I told them that it’s not something I could suddenly turn on or off with a push of a button. That’s who I am, I’m proud of it and I don’t want to change it.

One of the students told me that if he ever came out of the closet his parents would throw him out of the house. I told him that I was sad that he thought so. I told him how my family had accepted me and told him that in my opinion if his family loved him and wanted him to be happy, it would accept him no matter who he would love. The other kid, the one who was disgusted and wanted to leave the classroom at the beginning of the story, looked at me and with a small nod said to me: “You know what, you’re right.”

In between we talked about soccer. I told them that I really love soccer and that I even flew twice to Barcelona to watch games. One of them was very surprised that I liked soccer and said it was cool. One of the girls looked at me and said to me: “This is so funny, I’ve never met a gay before.” I laughed and told her that I was glad we finally got to know each other. She even offered me some of the snack she brought from home.

My coming out created an interesting and exciting conversation. The kids asked me how we bring children into the world and how we get married. In my answers and my existential existence, I presented them with a different reality, a reality they didn’t know. I broke stigmas, taught them about acceptance of the other and tolerance. I managed to change their worldview. In the educational context without harming the rest of the other subjects, this is the most important lesson, the lesson that every child must undergo. Finally, the students remained in class and unofficially gave me the authority to educate them.

A few months ago, when the state decided to define the members of the LGBTQ community as 2nd class citizens (in the Adoption Law crisis), I declared that in my opinion the change we wish for will come from education. I promised myself that in every school I teach, I’d tell my students that I was gay, so that everyone knew, from an early age, that the word homo was not a curse, it was not something to be afraid of and it was not disgusting.

I promised and now I do it.

I wish that through these actions, in a few years this issue will become trivial. But today we are in the midst of a social-cultural revolution and the responsibility is on our shoulders.

I call upon all the LGBTQ educators among us to be courageous and join me, to come out to the students, to create a sincere, sensitive and teaching discourse, not to judge our students even if they are disgusted with us. They don’t know, don’t understand. Let’s not be afraid because there’s really nothing to be afraid of. If we continue to hide it from them, then we shouldn’t be surprised that we still encounter homophobia on the streets and unequal rights. Let’s change reality, break stigmas and educate for tolerance.

This is the only way can we create the real change and be equal in our country.