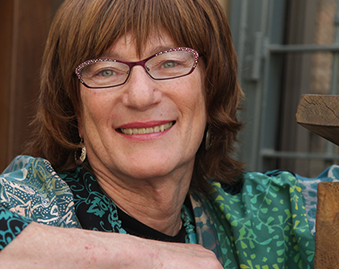 Yiscah Smith gave a talk in Los Angeles about her life as transgender and Jewish woman, based on her autobiography ‘Forty Years in the Wilderness: My Journey to Authentic Living’

In 1971, Yiscah Smith stepped off the plane in Israel for the first time as a 20-year-old man from Long Island, New York named Jeffrey. He knew very little about Judaism. In fact, he didn’t even know why he was there.

Forty years later, after a gender transition and just before turning 60, Smith returned to Israel as an Orthodox Jewish woman named Yiscah. This time, she had no need to contemplate her next move. She headed straight to the Western Wall in Jerusalem to finally join her fellow women in prayer.

“At the moment when my feet touched the women’s space for the first time in my life, nothing I had ever done until that moment felt as natural and right,” Smith said.

Then, she approached the wall.

“Shivers ran through my body, as the tears fell, and as I uttered words of gratitude and praise, I knew in the deepest recesses of my very being, in the marrow of my existence, that my transition was God’s loving and compassionate expression of bringing me back home—to Him, to myself, and to my spiritual center,” she writes in her memoir, “Forty Years In The Wilderness: My Journey To Authentic Living.”

Smith’s journey has been one of reconciling her transgender and Jewish identities. At times, they supported one another. At other times, she thought she would have to choose between two fundamental parts of herself, destined to an incomplete existence. She now travels the world inspiring others to live what she calls an “authentic life.” Smith compares her four decades living in the wrong body to the Jews who were sentenced to roam aimlessly through the desert, holding onto a promise from God that they would someday be rewarded for their agony with a home.

We all live “in the closet” at various points, she said earlier this year in Los Angeles at Beth Chayim Chadashim, the world’s first LGBT synagogue. Smith has become a force for inclusivity in the Jewish community, but her message is a universal one: Listen to your voice. Only you know if you’re being honest with yourself and others about who you are.