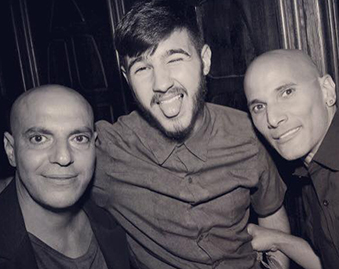 Roy Mimran, 17 and a half, from Givatayim and Tel Aviv, was the boy with the famous T shirt “I’ve got two fathers, and I don’t apologize” who drew attention before the last elections in Israel. This boy faces a war he had to deal with throughout his whole life – the war against homophobia. A child in the third grade promises his parents that he will look after them – Have you seen such a thing? After all, his moving life story is part of the history of the LGBT community in Israel. 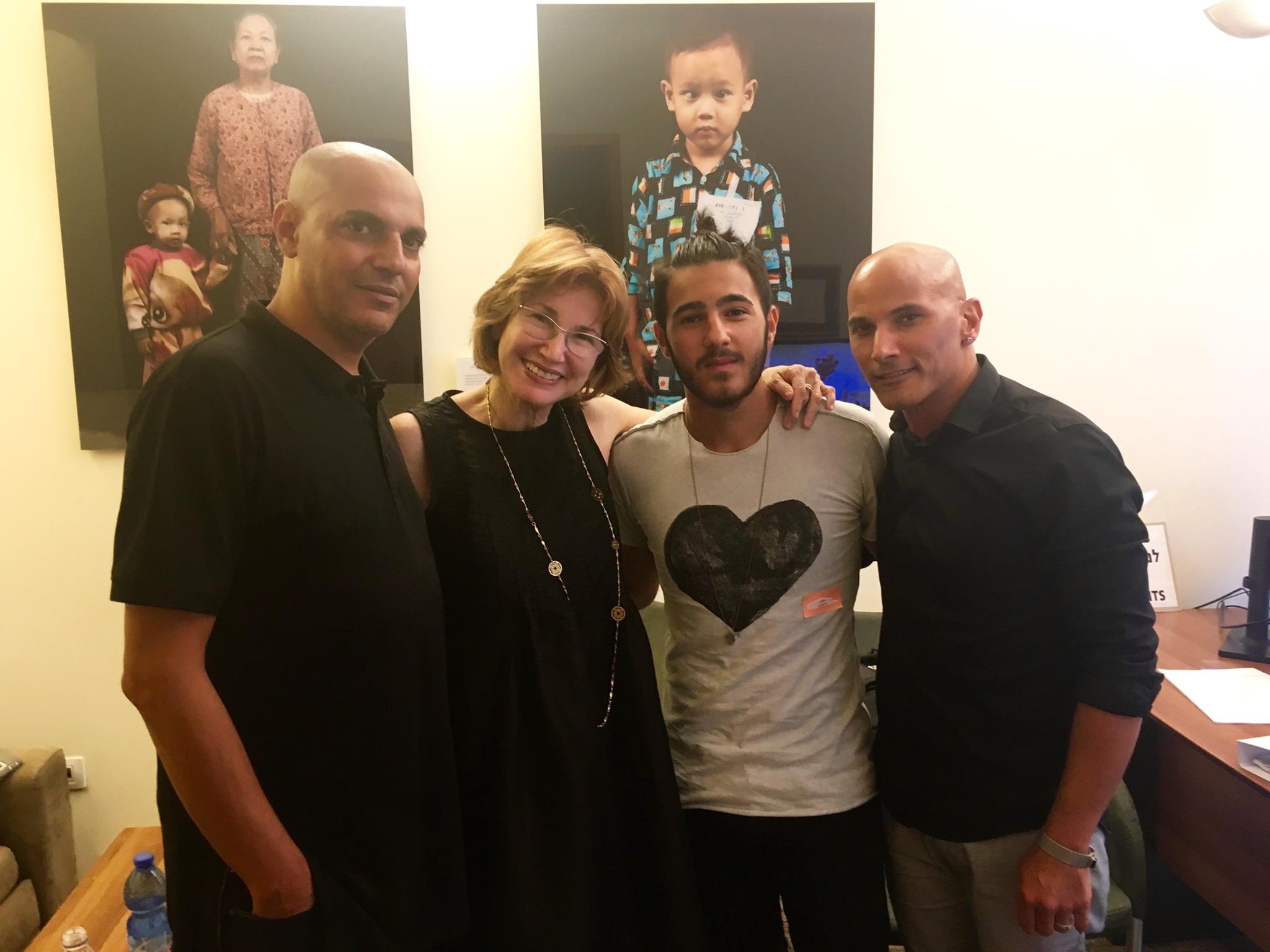 Roy Mimran with his fathers, Effi and Yariv, and MK Yael German

“Some would say, ‘Who is this Roy? I don’t know him’, and the truth is, you really don’t know me. I’m not a poster boy; however, my life has been interwoven with parts of the history of the LGBT community in Israel. My parents were pioneers by the way they brought me into the world, when it was still rare to find community members with children of their own. When the concept of different parenting was not in the air at all. And now I’m here, asking you to get to know me, to get to know my war and and the hardships in Israeli society that can be cruel sometimes. I’m no different, and my family is no different. I’m a normal kid who grew up in a normal home. A warm home, A home that educates for the love of humanity, for giving free love for everyone. A perfect home.

I was born in 1999 into a family of two lovely fathers and an amazing mother, a family which is all part of the LGBT community. My parents were pioneers in the community when they walked proudly along the street with a stroller. At 5-6 years old, children still don’t understand concepts like ‘gay’ or ‘lesbian’. My kindergarten teacher at the time mentioned often that children have families of mother and father, mother and a mother, father and father etc., and they all need to be loved and respected. So when I arrived at any family event at the kindergarten accompanied by my mother and two fathers, other children didn’t see it as strange at all. On the contrary, they wanted to be part of us.

So you think that everything went great? Definitely not. In 2006 I started first grade. I wanted to play soccer with friends during breaks, to laugh and goof around, go to a friend ‘s home and play board games. That’s all I wanted, but I didn’t get the things that for every child in this age are obvious. I had no friends. The nonsense games I was supposed to play with friends, I was playing with my mother at home. Going to a friend’s home or playing board games? No way. I would go to my teddy bear and play with him, crying and hugging him every day, because I had no friends. I write this with a lump in my throat, because these tough experiences I went through repeated over and over in my mind.

I wish it was just that, but teasing and bullying have become an unremitting part of my daily routine. “Look at him with his gay fathers,” “go away, you fag, you’re probably just like them”, “Is it fun to see daddy and daddy kissing, you faggot?” – that’s just part of the grand vocabulary of my fellow students at that time.

One day, in third grade, I came home crying and I asked my dads, ‘I don’t know what they want from me, what’s ‘gay’ anyway? Are you like that?’ An innocent child in third grade tackled the parents. Then it happened, a moment I won’t forget. They sat me in their midst and said: “Yes, child, Dad and Papi are a couple, gay is a man who loves another man and we are like that. Dad loves Papi and Papi loves Dad.” I raised my tear-streaked eyes and said to them: “I love you just the way you are, you are my parents,you are the parents I wanted to have, I promise to look after you, always.”

That day was a turning point in my life. I promised myself that day that enough is enough. From now on I would be strong. And so it was. When other kids came and teased, I told them: ‘Yes, they’re gay, and they are parents just like yours. The only difference is that I was raised to love and hug the other and not to bully. Have a nice day.’ I shut everyone’s mouths without fear, and it worked. In the sixth grade, children already understood more about life, and I decided I wanted to introduce them to my family. I invited the whole class to a slumber party at my fathers’ home.

After the slumber party an amazing thing happened. My fathers became instantly admired among my friends and were crowned Best Parents Ever. From that day on, I became popular and everyone’s favorite child, one who people look at as who he is. Suddenly I became the coolest, the funniest kid. The boy who everyone loves to love (forgive me, right? I’m not trying to toot my own horn).

When I got to high school my life became perfect. I had an amazing girlfriend for a year an a half , many friends, many female acquaintances It was an amazing period for me. Throughout that whole period since the third grade, every time I came across homophobia I fought it, and then came the moment that brought my fight into the limelight.

It started when I saw the video of the ‘Jewish Home’ political party. I said to myself, there’s no way I’m staying silent. I asked my parents to help me make a shirt that reads “I am the son of two fathers and I don’t apologize”, and then it happened: me,in front of Yinon Magal, one on one, in front of the Knesset members, members of political parties and in front of a whole school. I raised my voice for the right to be equal. That incident made a huge buzz. Commentaries, online articles, guest in morning TV programs, even an article in the news. I was so happy, and not for the reason that I was seen in people’s homes. I was glad because I managed to bring the fight against homophobia into the daily discourse, I was glad I showed people the road to free love. 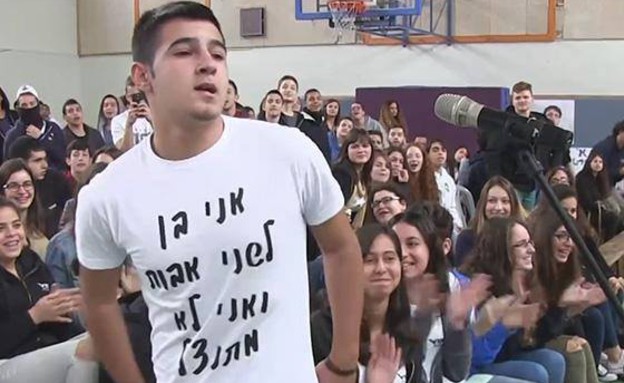 Roy Mimran and the T Shirt, two years ago: “I have two fathers and I don’t apologize”

Two years have passed since then, many of social media posts, talks and continuing my normal life. And then he came, the respected rabbi with his incitement against the LGBT community. Once again I didn’t shut up, I placed an iPhone in front of me and and started talking. I poured out all that is in my heart, and why? To continue my fight against homophobia that shockingly still exists in Israeli society in 2016. Homophobia must be eradicated from our culture so that everyone here is equal, and so that free love will not be an empty slogan. I continue to cry out that we are all equal. It really doesn’t matter who we are, what we are, what our sexual orientation is, what our identity is, what our gender or whatever our religion is – we are all human. We are all equal.

If you’ve read up to here and still don’t know what my goal is, the bottom line is that no child, boy or girl should go through what I went through. My war is to erase homophobia in our country, a war for the right to be equal in a country that is a democracy. Never be afraid to be you. Be you, love yourself because you are the most beautiful and most worthy just as you are.