From Stonewall to 2014’s U.S. Supreme Court ruling legalizing same-sex marriage in all 50 states — also in June — Jews have been at the forefront of the fight for LGBTQ rights. JTA lists nine of the most influential Jews who have helped make LGBTQ issues visible and are still working to enact change.

Jazz Jennings — who was born with a longer, “very Jewish” last name — has accomplished a lot for a 15-year-old: She’s a reality TV star, a published author and a face of Johnson & Johnson’s Clean & Clear campaign. (She was also the youngest grand marshal of New York’s Pride Parade on Sunday.)

Jennings’ book and popular TLC show “I Am Jazz,” which focus on her life and obstacles as a trans teen, have made her the unofficial face of America’s transgender youth.

If you surveyed Americans about the most important works of art symbolizing the LGBTQ community’s struggles and triumphs, Tony Kushner’s play “Angels in America” would likely be near the top of the list.

In addition to writing screenplays for films like “Munich” and “Lincoln,” he has since written defenses of gay idealism and spoken publicly about the AIDS crisis. Although his criticism of Israeli government policies has riled many in the pro-Israel community, he alsoinsists, “If I were to imagine laying down my life for any country, it would be Israel as much as any other.” 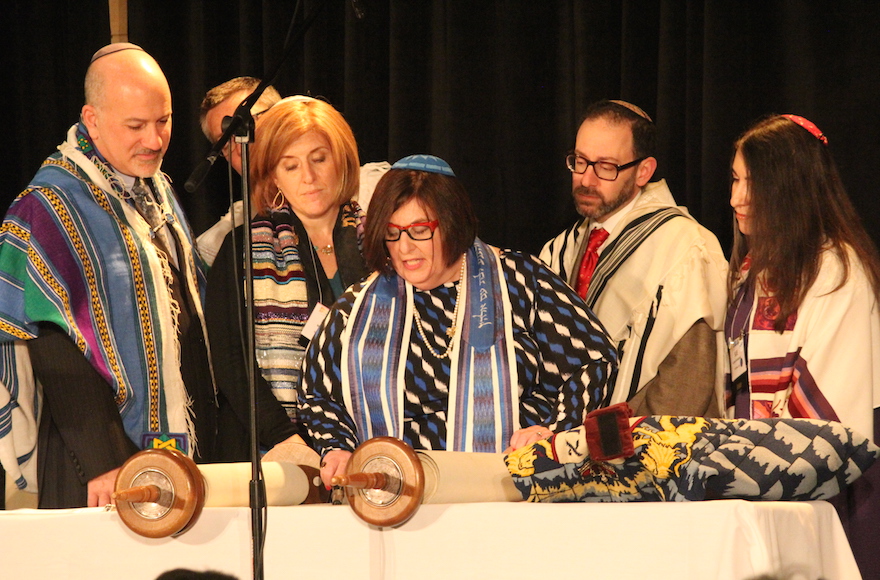 When Rabbi Denise Eger became the president of the Reform movement’s Central Conference of American Rabbis last year, she did not become the first openly gay or lesbian clergy member to lead a rabbinical group. That honor belongs to Rabbi Tova Spitzer, who became president of the Reconstructionist Rabbinical Association in 2007.

But Eger’s accomplishment was just as momentous, if not more so, since the Reform movement is by far the largest Jewish denomination in the U.S., and the Central Conference of American Rabbis is the largest and oldest rabbinical organization in North America.

Eger’s professional and activist career arc — from coming out to the L.A. Times in an article in 1990 to founding Los Angeles’ pioneering LGBTQ-friendly Kol Ami synagogue in 1992  — closely parallels the arc of LGBTQ rights in America.