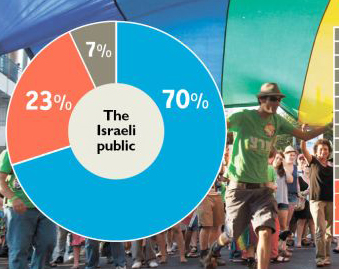 According to Haaretz new poll, Israel’s broad public strongly supports gay rights – about 70% would like to see LGBT equality – but only 8% of Haredim back full equality. Poll shows extreme gap between the public and the Knesset opinions.

The Ministerial Committee for Legislation will debate several bills Sunday that were initiated by Yesh Atid to promote the rights of the gay community and adjust the status quo on religion and state. The move comes as a new Haaretz poll says that 70 percent of the public supports equal rights for gays.

The first bill is the one Health Minister Yael German announced last week that would allow the unmarried – whether heterosexual or homosexual – to use local surrogate mothers. The second bill was initiated by MK Ofer Shelah to prohibit discrimination based on sexual orientation. It was voted down by the same panel last week, but is being raised again after both German and Limor Livnat (Likud) requested a revote.

A third bill, proposed by MK Adi Kol, would prohibit the state from asking citizens to name their fathers on official documents. According to Kol, current law does not recognize new family compositions, including children born to lesbian couples or the children of homosexuals who cannot or do not want to single out their biological father. The bill would allow people to choose which parent to name on the form, or to name both parents.

Another bill, initiated by MK Aliza Lavie, is liable to further inflame the current tensions between Yesh Atid and Habayit Hayehudi. The bill would cancel the dual authority that the rabbinic courts and family courts have over various issues, which leads to a “race of jurisdiction” between divorcing parties, who rush to file claims in the court they favor, thus precluding the other court from hearing the claims. 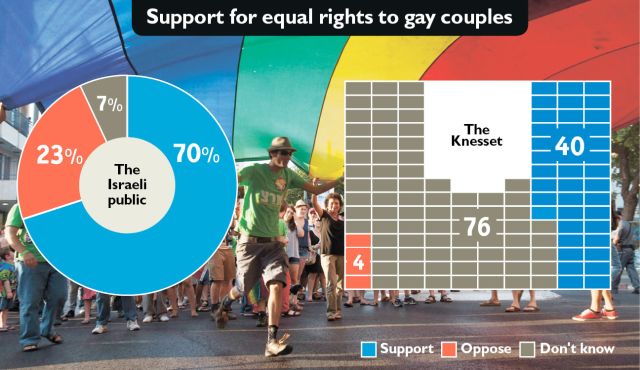