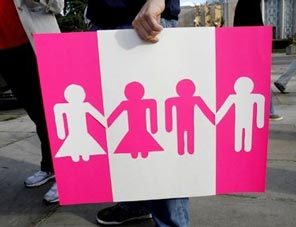 According to a new ABC News-Washington Post poll, 51 percent of Americans support gay marriage. The survey of registered voters is reportedly the fifth consecutive news organization poll since March 2011 to find that more than half of Americans are in favor of marriage equality.

The percentage of Americans in favor of gay marriage is slightly higher than the results of a similar Gallup poll released in May, which found that 50 percent of respondents believe gay marriage should be recognized as legally valid.

Conversely, 47 percent of the 1,023 adults polled between Nov. 7 and 11 said they oppose gay marriage.

The results of the ABC/Washington Post survey also includes some interesting findings about the ages and political leanings of those who support gay marriage. More than six in 10 young adults, and three out of four liberals are in favor of marriage equality, while two-thirds of senior citizens and 81 percent of “very conservative” respondents oppose gay marriage, according to ABC.

The U.S. Supreme Court is expected to discuss the possibility of hearing arguments that challenge the Defense of Marriage Act, which defines marriage as a union between a man and a woman, later this month. If the nation’s highest court strikes down the 1996 law, same-sex couples could receive hefty tax windfalls from refunds of estate or income taxes, according to CNN.