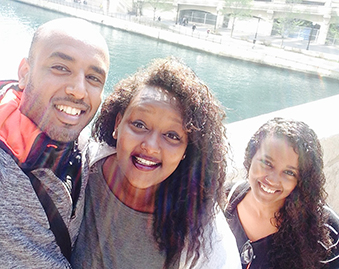 One of the highlights of our tour with the members of KALA has been the many meetings they have had with Jews of color across the U.S. Both African-American Jews in the U.S. and Ethiopian Jews in Israel often find that their Jewish identity is questioned, because so many people make the false assumption that being Jewish means being white. But just as religious LGBT people who refuse to give up their Jewish or sexual identities become a bridge between the LGBT and the religious communities, so do Jews of color who celebrate both their Jewish and their racial identities become a bridge between two rather different cultures that have much to learn from each other. The first-ever Jews of Color National Convening takes place in New York this weekend. New York Post

Gay Israeli singer Hovi Star has spoken out about reportedly suffering a homophobic attack on a Eurovision trip to Russia. (Multiple Sources)

Israeli actor Tal Kallai, also known by his alter-ego Talula Bonet – a veteran leading Israeli drag queen – was commissioned by the Foreign Office to excite the Japanese audience on the main stage of the Gay Pride Parade in Tokyo (Tokyo Rainbow Pride), considered one of the largest in Asia. A Wider Bridge

The Passover holiday is a time for members of Michigan’s LGBT Jewish community to not only look back to the past, but to look at the present as well. The State News

K.B. Frazier, who identifies as a “freedom-fighting black, trans, queer Jew” from St. Louis, believes there’s a close connection between the story of Passover and the movement for black lives. The Huffington Post

Rabbi Avi Orlow reminds us the story by Rabbi Yisachar Shlomo Teichtal, who teaches that the ultimate joy is in welcoming our children as they come home. The Huffington Post

CALIFORNIA — As part of “Gaypril,” Abby Stein spoke with California State University San Marcos students via Skype on April 21 in the Gender Equity Center about her struggles as a trans woman and her transition within the Jewish community. The Cougar Chronicle

OREGON — Oren and his husband are computer engineers who live in Haifa, a historic Israeli city perched on the Mediterranean. They turned to Portland resident Jennifer Mitchelldyer, her husband, Craig, and their children for help starting a family. OPB

TEXAS — Jason Taper, a freshman student at the University of Texas, organizes a Pride Shabbat on May 6, so that LGBT Jews in the area can come and share their stories. The group will also host Imri Kalmann, co-chair of the Aguda. Daily Texan Online

WASHINGTON, DC — Jewish Lesbian author Leah Lax will make an appearance at the Library of Congress on Tuesday, May 3. The Washington Blade

The Israeli website AskPeople allows users to upload personal questions and consult with other users, anonymously. On Passover day a question from a 27 year old woman was uploaded, where she tells how she came out to her family during the Passover Seder. Mako Pride

A new program at the Tel Aviv municipality will promote locating and employing transgender people in the municipality offices. Ynet

A gay couple arrived at the local hospital in the city of Rehovot Wednesday with injuries after being beaten up by a bunch of men, allegedly because it was known that the couple had gotten married in Canada a week prior. WDG

In a birthday post on his Facebook page, popular gay Israeli singer Amir Fryszer Guttman, who was recently diagnosed with cancer, thanked the medical team at Ichilov hospital. Ynet

Should Tel Aviv Pride planners roll up the rainbow carpet and say no to the government profiting off of their celebration?
Instinct Magazine

Massechusettes Senate President Stan Rosenberg hosted a panel to educate legislators and the public about ending the discrimination against transgender people in public places. WWLP.com

In her recent column, Prof. Corrine Blackmer (who calls herself ‘proud Jewish queer pinkwasher’) identifies the right-wing “pretend friends” of LGBT people in Israel and abroad who really do use Israel’s superb record on queer rights only for propagandistic purposes. Algemeiner

The rabbis calling to integrate gays into their community did a great deed, but Saar Maoz, the star of Tomer Heymann’s latest award-winning documentary, is not celebrating. He’s not celebrating because it was a miracle he was saved. Haaretz

Transgender advocate Hannah Simpson says that the violence against transgender women will end when we teach our sons that loving a trans woman is loving a woman. Refinery29

Author Mark Brennan Rosenberg says that only a few brave souls can truly be comfortable being single and embracing who they are without having someone beside them telling them how great they are all the time. The Huffington Post

Eliad Cohen only turns 28- and already managed to become a worldwide renowned ‪‎gay‬ brand: “My work is much less sexy than people tend to imagine,” he says in a new interview. A Wider Bridge