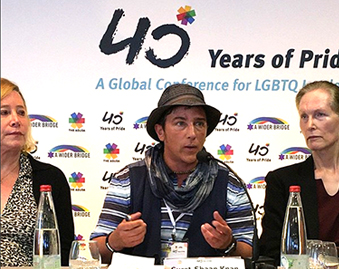 Transgender rights and visiblity is the theme of this year’s Tel Aviv Pride Celebration. In a 40 Years of Pride panel, leading transgender activists from around the world discussed some of the most pressing issues facing the community. 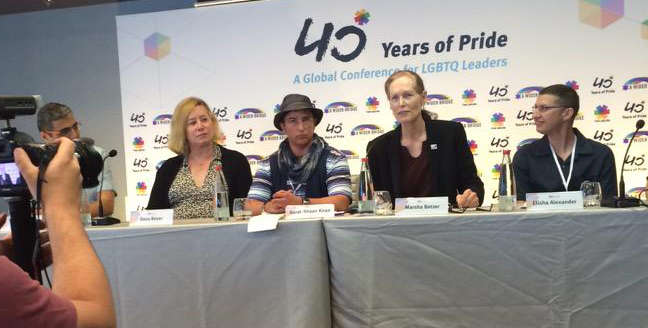 On the cutting edge of the fight for equality is the movement for transgender and gender non conforming rights. Marsha Botzer from Seattle’s Ingersoll Gender Center, Dana Beyer from Gender Equality Maryland, Liberal Judaism’s Surat Shaan Knan and Elisha Alexander from Maavarim took part in a Trans Visibility and Empowerment panel during 40 Years of Pride conference.

Marsha Botzer began on a note of optimism: “we are no longer a pathology, but a diversity… Where we were once a lone community we are now part of the many.”

Together our conference addressed the uncomfortable truth that transphobia persists not just in the straight world, but in our own LGBTQI community as well. Despite our shared experience of suffering and discrimination too many still lack an understanding of the struggles of our transgender and gender non conforming family.

Surat-Shaan Khan of Liberal Judaism and Ritual Reconstruction points to the power of stories to connect us and called on us to find the bravery to share our own. More widely, Khan illuminated the power of ritual celebration of becoming ones authentic self in our community- from coming out to engaging or completing transitions in all their forms. And a young panelist dreamed of a future in which “I can build a life without the mark of being trans on my head– not because I’m not proud of being trans (trans are the coolest) but because I want to choose to be visible or not for myself. I’m trans, but I’m also a person.”

Surat-Shaan Knan addresses transphobia inside the queer community. “It’s about stories. We have to embrace diversity, but we cannot do that if we’re stuck in the binary of modern society. We should embrace each other’s complexities.” #TelAviv #Israel #TelAvivPride #TLV #TLVPride #AWB2015 #Pride