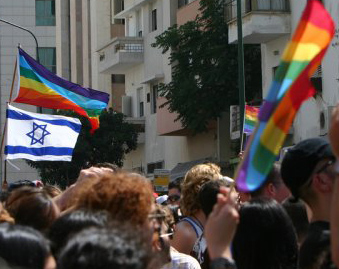 In her recent column, “proud Jewish queer pinkwasher” Corrine Blackmer identifies the right-wing “pretend friends” of LGBT people in Israel and abroad who really do use Israel’s superb record on queer rights only for propagandistic purposes.

From 1988, when sodomy statutes were repealed in Israel, to 2014, when Tel Aviv unveiled the first memorial to LGBT victims of the Holocaust, to 2016, when the ruling of the National Labor Court in the Meshel case meant that trans people became covered under the Israeli Equal Employment Opportunities Law, Israeli gay activists have waged a long, hard, but impressively successful, battle for LGBT rights in the only nation in the Middle East that protects them, their friends, their spouses and their organizations. Perhaps most encouragingly, the once silenced and closeted voices of religious, Mizrachi, and right-wing Israeli queers are now coming and speaking out to create fundamental transformations in Israeli culture, politics and religion. Negative stereotypes about LGBT Israeli Jews, Christians and Arabs are becoming history.

This is not to say that the queer rights movement in Israel does not continue to face significant challenges, setbacks and tragedies. Some of these emerge from familiar religious fundamentalist sources. For instance, gay — as well as heterosexual — marital unions remain outside Israeli law, because the Orthodox rabbinate controls marriage. Further, in 2006, Muslim Knesset member Ibrahim Sarsur warned gays that if they dared to approach the Temple Mount during the World Pride parade in Jerusalem, they would do so “over our dead bodies.”

In response, gay rights leader Charles Merrill stated that if Christianity, Islam and Judaism wanted homosexuals stoned as dictated by their ancient scriptures, then “our gentle innocent blood will be on their hands.” Such innocent blood was indeed shed on July 30, 2015, when Shiri Banki, a 16-year-old high school student, became one of six people stabbed by an ultra-Orthodox Jew at the Jerusalem Gay Pride march. Tragically, Banki, who had gone to the parade to support her queer friends, lost her battle for life on August 2.

Other dispiriting setbacks issue from anti-Zionist voices within the queer community who allege “pinkwashing,” using strikingly fallacious arguments. Jasbir Puar, an academic feminist who coined the term, contends, along with many others, that Israel uses its sterling record of LGBT human rights as a deliberate ploy to detract attention from the conflict with Palestinians and the putative denial of political justice. Such charges are tantamount to contending that American queers use Gay Pride parades to distract from the mistreatment of indigenous tribes or that Israelis tout their sterling medical, technological and environmental achievements as purposive diversionary tactics. These invidious accusers toss everything together and assert that one cannot laud queer Israeli rights or any other worthy achievement because of “the occupation,” which remains the only facet of Israeli life that has real meaning. Solidarity with Palestinians, including terrorist organizations like Hamas, requires nothing less than calls for the end of the Jewish state, which of course includes its queer community.