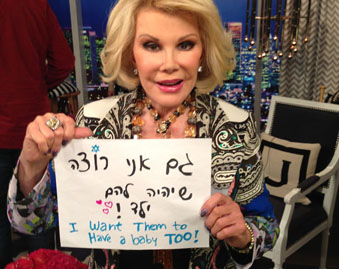 Over the past few weeks, A Wider Bridge brought you the personal and emotional story of Yuval and Liran, the Israeli couple who were trying to have a kid via surrogacy. We have published the story firsthand as written by Yuval Kaduri-Altman himself, then told you about the issue of legalizing surrogacy for gays taking  central stage in Israel  thanks to a YouTube video and a campaign by Yuval and Liran. They are trying to raise money to have their baby in the US parallel to their fight to legalize surrogacy for gays in Israel. We also told you about the A-list Israeli celebrities who joined the fight, photographing themselves with the sign that reads “We Want them to have a baby too”

Yesterday the subject returned to the daily discussion and the homepages of the major news outlets in Israel, with Joan Rivers and the stars of ‘Fashion Police,’ who photographed themselves with the sign, “We want them to have a baby too.”

How can you help Yuval and Liran? Click here to visit their campaign 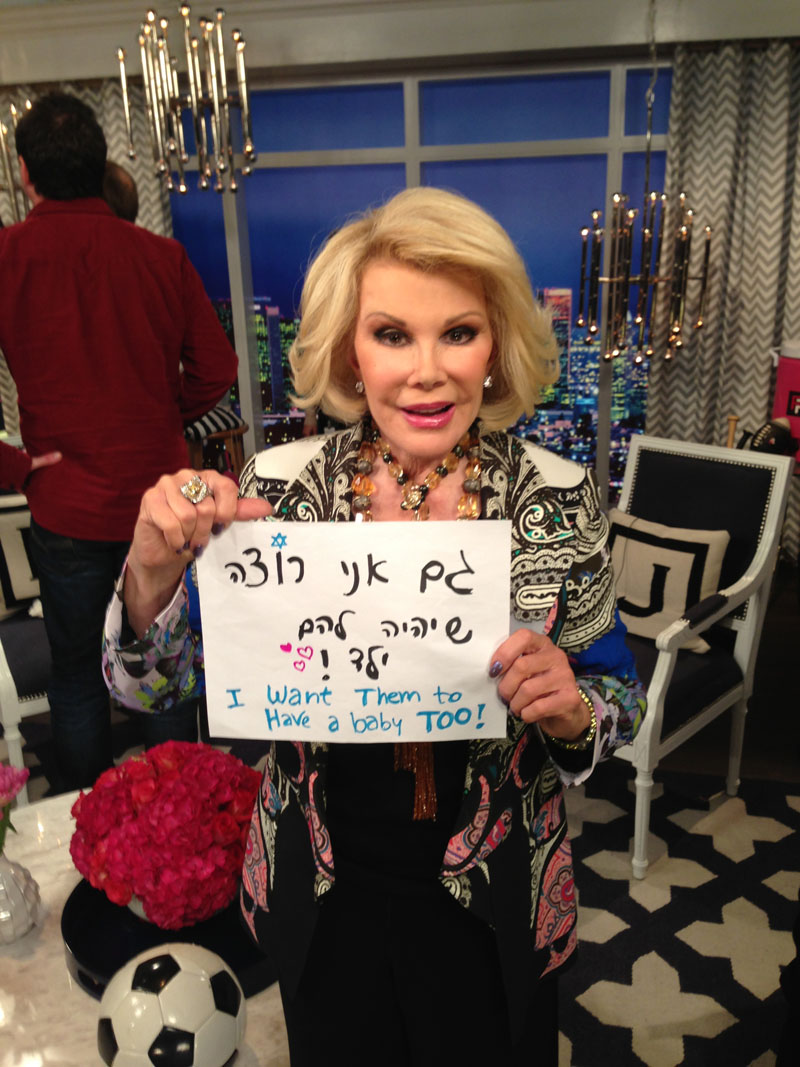 The wonderful gesture of Joan Rivers and her gang came after a request A Wider Bridge sent to ‘Fashion Police’ head writer and Joan’s close friend, Toni Tripoli, with links to the stories on A Wider Bridge’s website. “We’re so touched by the story, and the cast would be happy to do it,” Tripoli replied almost immediately. The sign was delivered to the set and the pictures were taken during the shooting of the show on Thursday.

In a personal message that was sent to the Israeli media with the photos, Arthur Slepian, CEO and founder of A Wider Bridge commented:

“Since we first heard about the story of Yuval and Liran A Wider Bridge has been trying to help in various ways, including increasing awareness about the problems of surrogacy for gay people in Israel. We’ve also been asking Jewish LGBT Americans to donate money for Yuval and Liran’s dream and cause.

When we saw the wonderful involvement of Israeli celebrities and thought about taking the subject a notch higher here in the U.S., Joan Rivers was one of the first names on our minds, because she has always been outspoken about her support for gay people and her love for Israel. On Thursday she proved to us that she’s not only talking, she’s also doing.”

“The Jewish LGBT community in America is proud of how Israel has evolved and how much progress the country has made regarding LGBT social issues and gender equality. The state of Israel is one of the main stewards of the future of the Jewish People, and continued progress on LGBT equality in Israel is important for Jewish people everywhere.” 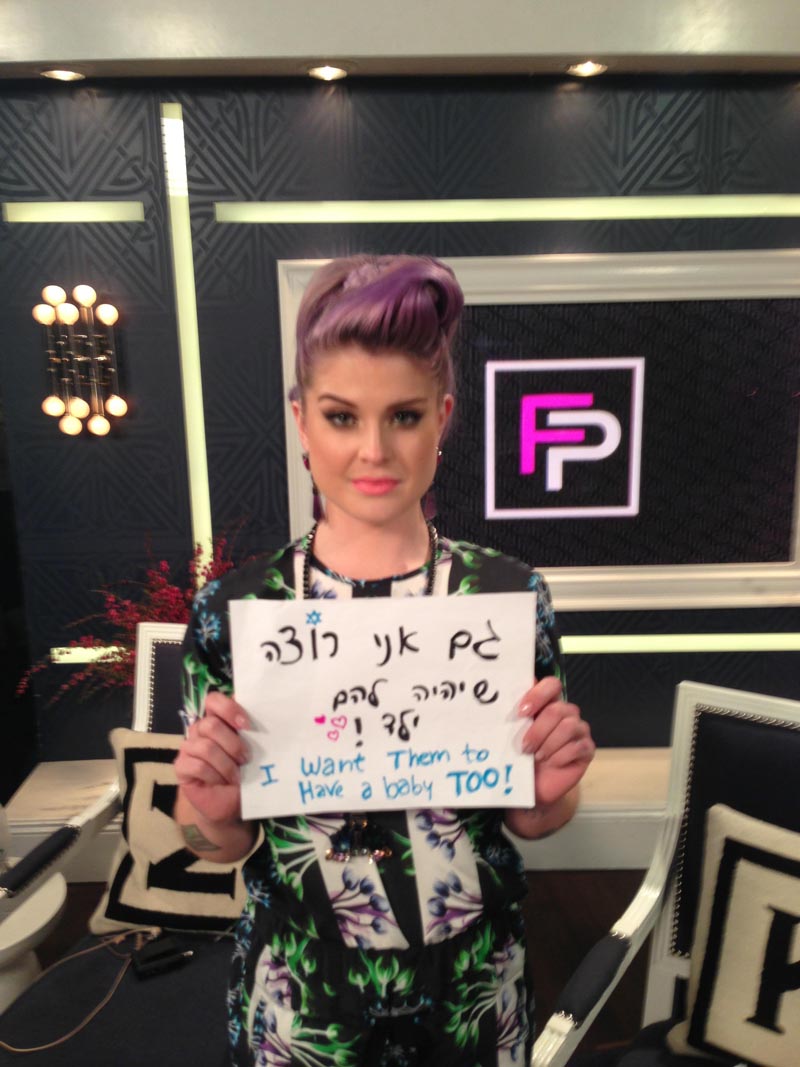 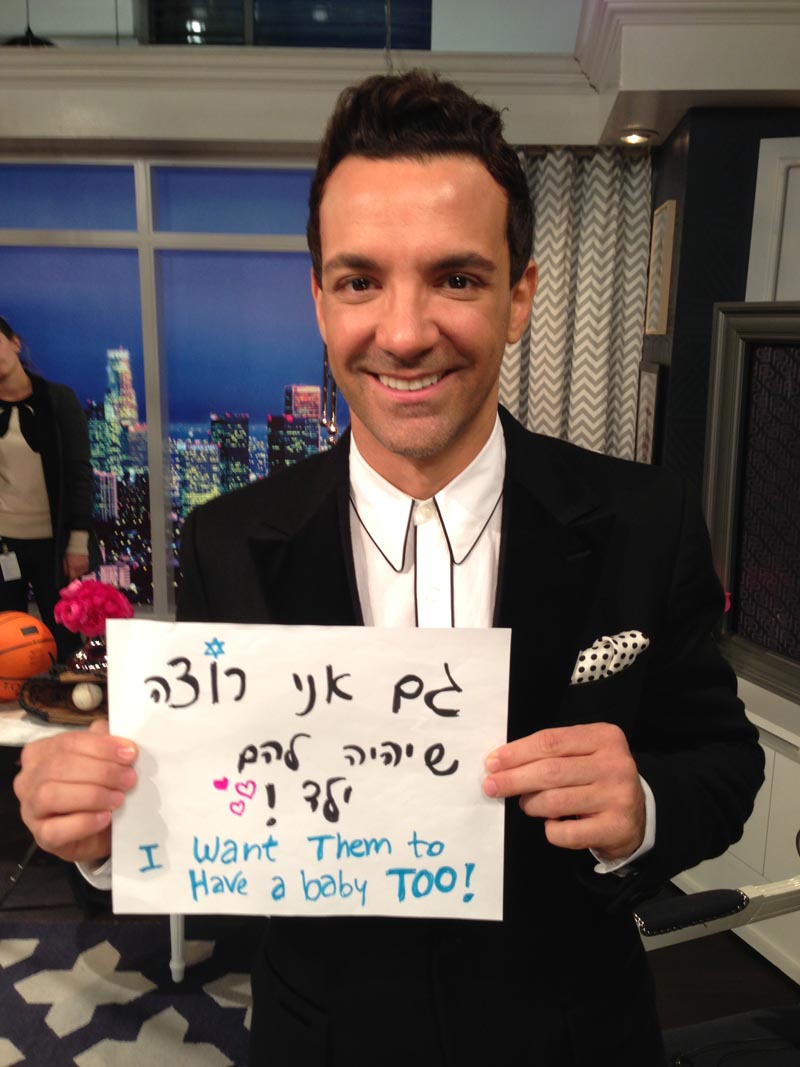