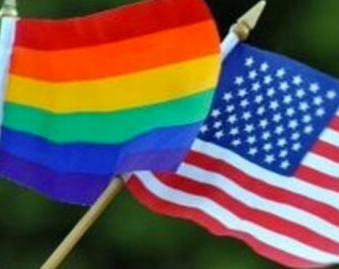 Jewish group that connects American and Israeli gays says its event at an LGBTQ conference in Chicago was cancelled under pressure from anti-Israel activists.

A group of American and Israeli LGBTQ Jews that was scheduled to appear at the largest conference of Lesbian, Gay, Bisexual, Transgender and Queer activists in the United States this week has been booted from the event because of pressure by anti-Israeli activists, the group says.
U.S. nonprofit A Wider Bridge, which builds connections between American and Israeli LGBTQ Jews, was set to host a reception with leaders of Jerusalem’s Open House at the Creating Change conference, which is scheduled to take place in Chicago January 20 – 22.
Last year the gathering, which is convened by the National LGBTQ Task Force, had 3,800 people attend.

“Sue told us our reception was being cancelled for reasons of safety and security but there was no evidence presented or elaboration on any security issues,” Slepian told Haaretz. “Nor were we given any opportunity to try to resolve them if there were any. Sue told us the conference would not publicize or communicate our event in any way.”

In the day or two before that call, Slepian and others saw one Twitter account holder slam their presence as “pink washing,” or an attempt to improve Israel’s image by touting its progress on LGBTQ issues. There had also been a blog post by a long-time opponent of A Wider Bridge denouncing their presence.
“We couldn’t imagine that it would result in this outcome,” Slepian told Haaretz. “It sounds to us like capitulation in the face of intimidation by a small number of very loud anti-Israel activists in the community who did not want to see us have any part of the conference.”
“It is outrageous. It is censorship, it is bullying, it is giving in to this new model that some people have if you disagree with some point of view it’s not enough to disagree but you have to deny them any platform to speak and be heard,” he said.
Continue reading on Haaretz