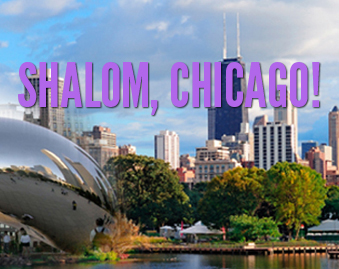 A Wider Bridge is pleased to announce the launch of A Wider Bridge Chicago, introduce our new Midwest Program Manager, Laurie Grauer, and recognize JUF Chicago for their support to make our expansion possible.

Since 2010, A Wider Bridge has been building a movement of LGBTQ people and allies, Jews and non-Jews, with strong interest in and commitment to Israel and its LGBTQ community.

A Wider Bridge Chicago has been many years in the making. Our work began on the West Coast in 2010 and expanded to the East Coast two years later. During the past year, we partnered with a broad scope of Chicago’s Jewish and LGBT organizations to bring three original programs to the community – including a talk at Mishkan Chicago by Yiscah Smith, trans Jewish educator; a discussion at the Center on Halstead with Chen Arieli, Co-Chair of The Aguda – Israel’s LGBTQ Task Force; and a media presentation with noted Israeli film producer, screenwriter, and media icon Gal Uchovsky.

Now we are excited to be truly on the ground in the Midwest, with Chicago as the central hub of our work.
From our Executive Director Arthur Slepian:”We look forward to becoming part of the fabric of Chicago’s strong and dynamic Jewish and LGBTQ communities. Together we will build opportunities for engagement with Israel – bringing dynamic Israeli LGBTQ leaders to meet Chicago’s LGBTQ and Jewish communities, and taking Chicago’s LGBTQ leaders on impactful missions to Israel. We are excited as well that the valuable work of Gesher Chicago will now continue under the banner of A Wider Bridge Chicago. And we are most grateful for the funding from JUF Chicago that has helped to make this happen.”

“Tye, Laurie and I look forward to engaging our friends and partners in Chicago’s Jewish, LGBTQ and pro-Israel communities as we work together to build support for Israel and its LGBTQ communities and strengthen the fabric of Jewish peoplehood in Chicago.”

We are excited to announce the addition of Laurel Grauer to the A Wider Bridge team as the first-ever Midwest Programs and Operations Manager. Laurie joins A Wider Bridge after several years as the Executive Director of Gesher Chicago. As Laurie takes the helm of our work in Chicago of building LGBTQ engagement with Israel, the work of Gesher, connecting LGBTQ Jews to Chicago Jewish life, will also continue, now under the banner of A Wider Bridge Chicago.

In her own words: “Joining the team of A Wider Bridge is truly a dream come true for me. I’m deeply committed to the work of A Wider Bridge — creating opportunities for LGBTQ Jews and allies to connect to Israel and to engage in meaningful ways with Israel’s LGBTQ community.”

“I’ve been proud to have led Gesher Chicago for the past five years, working to strengthen our Jewish LGBTQ community by organizing events, celebrations, forging partnerships, and creating online media resources. I’m thrilled that this work will now continue under the banner of A Wider Bridge Chicago. Chicago is known for many things; wonderful food, die-hard sports fans, and connecting to the world. I know that A Wider Bridge Chicago will help our community be a part of a stronger, connected global K’lal Yisrael.”

“A Wider Bridge is thrilled to have been awarded this Breakthrough Grant by JUF,” said Arthur Slepian, Executive Director of A Wider Bridge. “We got off to a good start in Chicago with a couple of excellent programs earlier this year and this grant will enable us to have a consistent presence in the area and involve more Chicagoans in our work. Until recently, the programming of A Wider Bridge has been focused primarily on East Coast and West Coast cities — it’s nice to be landing in the Midwest!” Continue Reading –>