Walla! News suggests Dana International for the role of the Israeli Minister of Foreign Affairs. In a festive video interview for Israel’s 70th Independence Day last week, veteran journalist Sagi Bin-Nun set down with Dana to reflect on 20 years since her grand Eurovision win with the song Diva. Since then, she has represented the bright side of Israel around the world; she is invited to pride parades everywhere, is interviewed by the foreign media and does excellent publicity work for Israel in the world. She makes it clear that Israel really has something to be proud of, and not just in its LGBT community. Dana International is not only an international gay icon but is also a symbol of Israeli culture. 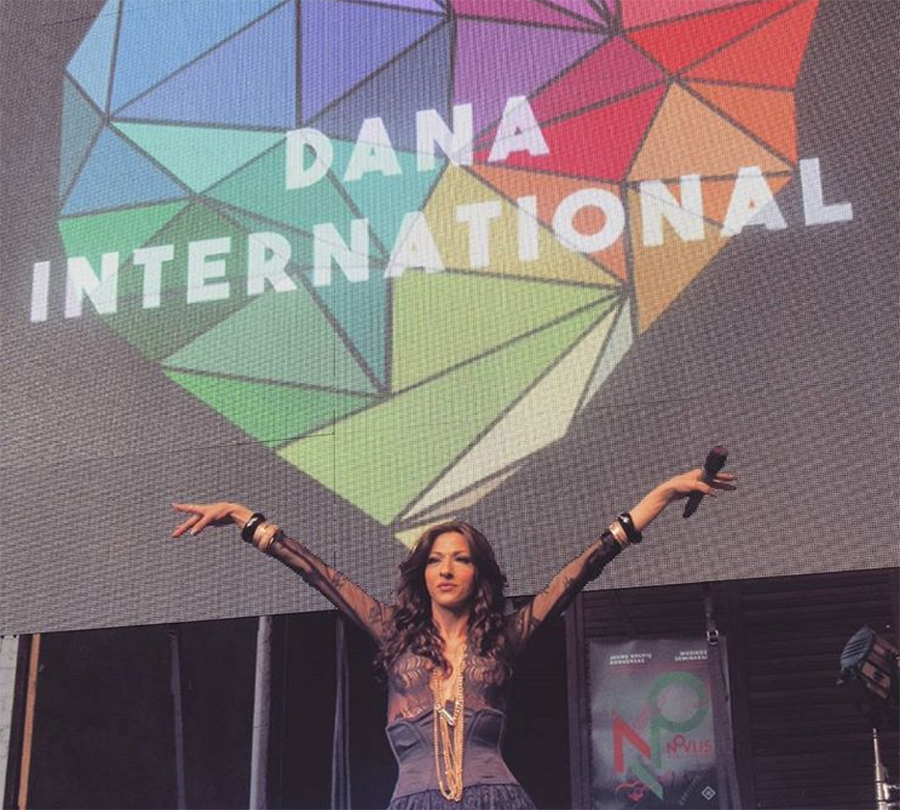 When asked if she would move from music to politics, she answered, “no, when you become a politician, you go into all the filth, especially in Israel.” Dana made it clear that she was satisfied with being an unofficial ambassador to Israel.

When you talk about Israel at events in the world, what happens when a conflict is occurred where on the one hand you feel uncomfortable with things that happen in Israel, such as the government’s opposition to a gay marriage, and on the other hand receive a government instruction page that is all roses? Will you rather be loyal to your truth or to the government’s page?

“I’m encoded in my DNA to be loyal to the state.”

The state and the government are not the same.

“I don’t care at that moment when I’m outside of the country. When I’m in Israel I can say what I think, if I feel like it. When I’m abroad, I think that the full half of the glass is much more important, that is, to talk about what is good here, about what we have here, things that are so much better than other Western countries, that is to say look at the bright side of things. The hard questions I leave to the politicians, but all this until it reaches human rights and so on. Then it does not matter the geographic location, the message is the same, LIVE AND LET LIVE. Sometimes I tackle Interviewers who are looking to get bad words out of me, to ‘get dirty’ about the country, and they don’t like my attempt to turn things around and talk about the good things. They try hard, and then we get into a little argument. But I always win.

“To be an ambassador, to speak for your country is not just when you’re giving interviews, it’s all about your conduct, it’s also when you’re not in front of cameras. You have to behave accordingly, be courteous in hotels and in front of taxi drivers, everywhere you need to represent your country respectfully. I have 20 years of experience in interviews, and if you ever have the patience to sit down and search, then you will read that I have regular sentences that I say, that I believe in, in the beauty of what this country has to offer. Sometimes I say bad things but in the most pleasant way possible. I still highlight the good that we have here compared to what happens to our neighbors.”

As a huge Israeli icon, what is the difference between the reactions you receive in Israel and those you receive overseas?

“It depends on where you are, what audience you’re hanging out with, how much people allow themselves to be friends with you, how friendly you are with people you meet with. There are people I meet with whom I’m ashamed to say their names but they are international icons, who in recent years have been … keeping in touch and having meetings and all, but very gently asking that the name ‘Israel’ will not be mentioned anywhere.”

“I can’t say, but these are names that we all know, famous names that prefer not to be connected to the State of Israel at this time. I find these kind of things very hurtful, it’s hard for me to deal with it but this is part of the price I pay for being a citizen of Israel.”

If the song “Diva” was going to compete in this year’s Eurovision, would it had a chance at all?

“Maybe. Listen, these are questions that it’s hard to answer, of course the production was different, it was much less modern. I think the Diva has magic, it’s a song between genius to stupid on the spectrum, I haven’t decided yet. I don’t know how to decipher it. I Think that its complexity and the lack of sense in its words, and the repetition of the phrases ‘Viva to Diva’, and such international names as Cleopatra, Aphrodite and Victoria, helped a lot. Tzvika Pik’s melody is a complex melody, between east and west. There’s an Eastern Europe sense to the melody so the Estern European countries connected with the song in an extraordinary way, and with the power that Eastern Europe has today, I believe that it would have restored the connection. ”

“But the song itself is less suited to the spirit of the Eurovision Song Contest today,” adds Dana, “it’s more of a Eurovision Song Contest classic, because it was created at the right time. People tell me that my win brought back Eurovision which was in danger of being cancelled. It’s a kind of wish that God made it come true, and magic, and the connection between many dot to create this win.”

“Wow, this morning I thought about it, that I wanted to write a post, but I was afraid of Miri Regev that she would kick me out of some show that I was about to be in. It’s one of the only things I’m really ashamed of and I wanted to take my phone and video myself speaking about it, but I stopped myself. It’s about the state of Holocaust survivors. Some of them live in Israel in hunger, poverty, lonely, suffering; I’m shocked by it. I feel like I want to cry for them but I hold myself [of making a mess]. Why? because me too have this little hypocrisy, that I have to keep my career going, and those deciders who are above me and hear things that are unpleasant for them to hear, they can exclude me from places, so I can’t say it [on social media] but I say this to you. ”

It’s disturbing to hear from you that you were angry but did not express it for fear that Miri Regev would damage your performances. An artist should not say his opinion?

Back to Eurovision: Do you think it’s time, after 20 years, to pass on the trophy, and we are expected to see Neta Barzilai wins this year?

“I don’t think it’s fair to gamble on Netta’s account, I don’t think she’s sitting at home thinking how fun that she said this, and he said that. The betting goes either way. She is the one who eventually has to prove it to the world. The more she hears that people are betting on her – the more stress it adds on her. So I think it’s better to let her and the international people who bet on her be in first place in the international rankings, to those who are a little more objective than us and less unbiased. If people are betting on her nonstop, I think it’s enough for her to get this attention abroad than hear from me and from Izhar Cohen and from the rest of the senior citizens’ home of the winners of the Eurovision Song Contest. “